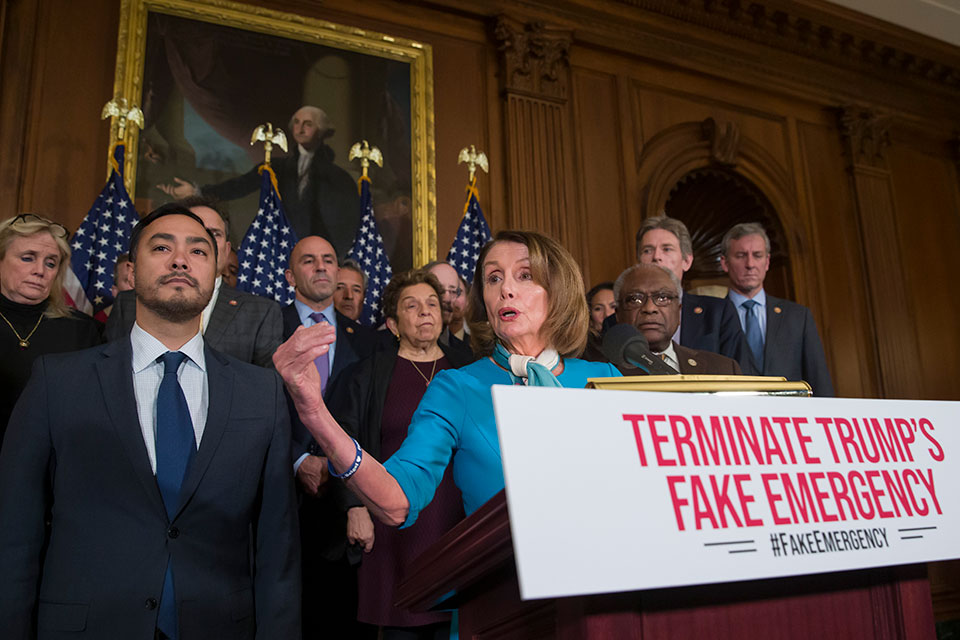 WASHINGTON (AP) — Democrats were poised Tuesday to ram legislation through the House blocking President Donald Trump from steering billions of extra dollars to his Southwest border wall, as top Republicans worked to keep GOP defections low enough to ensure that his inevitable veto would stand.

The House chamber is expected to approve the measure and send it to the Republican-held Senate, where it would take only a handful of GOP defections to pass. The legislation would revoke Trump's executive order declaring an emergency so he could siphon billions of dollars from the military to fund his proposed wall along the U.S.-Mexico border.

With three Senate Republicans saying they will support the legislation, only one more was needed to vote with all the Democrats to pass the measure and send it to Trump.

Trump is sure to prevail in the end since he could use his first-ever veto to kill the measure, but the White House is seeking to minimize defections among the president's GOP allies to avoid embarrassment. The administration issued a formal veto threat Tuesday ahead of the House vote, ramping up pressure on Republicans to hold the line.

"When you see the vote today there will be nowhere near the votes to override a veto," said House GOP Whip Steve Scalise, R-La.

Even many GOP lawmakers who view themselves as protectors of Congress' power of the purse say they are deferring to Trump in this case, saying he has the authority under a mid-1970s statute.

Democratic leaders say the vote is not about the merits of Trump's wall but how Trump is trampling on the Constitution by grabbing money that he can't obtain through normal means.

Republicans counter that problems with drug runners and human trafficking give merit to Trump's maneuver.

"I went down there neutral on this question. Didn't know whether or not I'd support a national emergency," said Rep. Adam Kinzinger, R-Ill., who recently returned from a National Guard deployment along the border in Arizona. "And I came back more convinced than probably anybody that this is the right thing to do."

"If Republicans vote their beliefs, we'll get a lot. If they vote their party, we won't get a lot," said House Majority Leader Steny Hoyer, D-Md.

Trump took to Twitter on Monday to urge Senate Republicans to stick with him.

I hope our great Republican Senators don’t get led down the path of weak and ineffective Border Security. Without strong Borders, we don’t have a Country - and the voters are on board with us. Be strong and smart, don’t fall into the Democrats “trap” of Open Borders and Crime!

"I hope our great Republican Senators don't get led down the path of weak and ineffective Border Security," Trump wrote. "Without strong Borders, we don't have a Country — and the voters are on board with us. Be strong and smart, don't fall into the Democrats 'trap' of Open Borders and Crime!"

Vice President Mike Pence is expected to discuss the issue with GOP senators during their weekly private lunch. A Justice Department official is also expected to attend.

Senate Democratic leader Chuck Schumer said Trump is trying to "bend the law" with his declaration of a national emergency on the southern border. He called on lawmakers to "speak up with one bipartisan voice" to put a check on the executive branch as the founding founders envisioned.

"What would stop a future president from claiming an emergency every week?" he asked.

On Monday, GOP Sen. Thom Tillis, R-N.C., said he would vote to block the order, joining Maine's Susan Collins and Alaska's Lisa Murkowski as Republicans supporting the resolution. Congress must defend its power of the purse and warned that a future Democratic president might abuse the power to advance "radical policies," Tillis said.

Another Republican, Sen. Lamar Alexander of Tennessee, called Trump's order "unnecessary, unwise, and inconsistent with the United States Constitution and I'll decide how to vote when I'm presented with something to vote on."

Senate voting on Trump's emergency order could drag under a rarely used procedure, which an aide said is possibly a first for the chamber. The law allows for up to 15 days of committee review— in this case, at the Armed Services panel — with a full Senate vote three days later. Senators, though, said the process could be expedited.

At issue is Trump's longstanding vow to build a wall along the 1,900-mile southwest border, perhaps his top campaign promise. He has long since dropped any pretense that money for the wall would come from Mexico, which he once claimed would be the source of funding.

Earlier this month Congress approved a huge spending bill providing nearly $1.4 billion to build 55 miles (89 kilometers) of border barriers in Texas' Rio Grande Valley, ending a dispute that had led to a record 35-day partial shutdown of the government. Trump had demanded $5.7 billion to construct more than 200 miles (322 kilometers).

Trump's declaration of a national emergency gives him access to about $3.6 billion in funding for military construction projects to divert to border fencing. Lawmakers in both parties are recoiling at the politically toxic prospect of losing cherished projects at back-home military bases. The Defense Department has not identified which projects may face the ax.

But the administration is more likely to tap $600 million from a federal asset forfeiture fund first. In addition, it is considering shifting more than $2 billion from Defense Department accounts into a Pentagon counter-drug fund to be tapped for wall construction.

Trump's edict is also being challenged in the federal courts, where a host of Democratic-led states such as California are among those that have sued to overturn the order. The House may also join in.