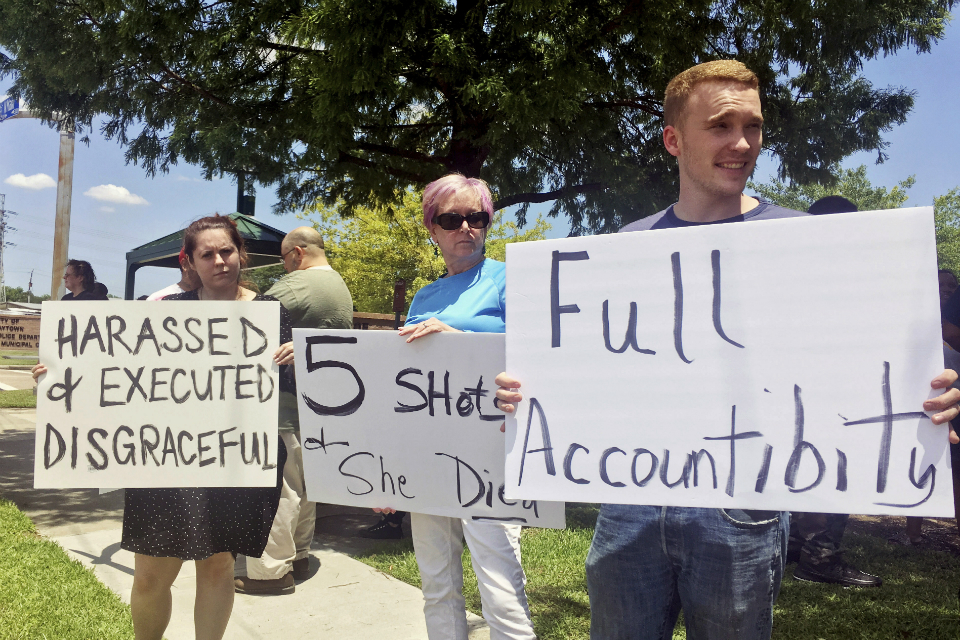 BAYTOWN, Texas (AP) — A police officer shot and killed a woman at a Houston-area apartment complex after she hit him with his Taser during a struggle, shocking him, police said.

In a video recorded by a witness and posted on social media, the officer can be seen standing over Pamela Turner and reaching down to try to grab her arms. Turner, who is lying on the ground outside the apartments in Baytown, yells "I'm pregnant." Moments later, something flashes as she reaches her arm out toward the officer. Suddenly, the officer pulls away from Turner, steps back and fires five gunshots.

Police Lt. Steve Dorris said Tuesday that the officer shot at Turner after she hit him in the groin with the Taser. Turner did not fire the stun gun but it shocked the officer when it struck him, Dorris said.

The officer, who police have not identified by name, has been placed on paid administrative leave, Dorris said. The department is reviewing whether the shooting was in line with its policy on the use of deadly force, he said.

Before the shooting, the officer, who is Hispanic and an 11-year veteran of the police force, was patrolling the apartment complex and tried to arrest Turner because he knew she had outstanding warrants, Dorris said. The two had previous dealings, but Dorris did not provide further details about the interactions or Turner's warrants.

Turner had three outstanding misdemeanor warrants for two separate incidents, according to Harris County court records. She was accused of criminal mischief and assault on April 25 after a manager at her apartment complex told police that Turner scratched her face and broke her glasses during a confrontation over an eviction notice.

On May 2, court records show, Turner was again accused of criminal mischief for damaging the back window of a woman's car.

Following her May 2 arrest, Turner was ordered to undergo a mental health evaluation, according to court records.

Video of the Incident Surfaces

The video of what happened Monday night shows the officer and Turner engaged in a struggle after he tried to arrest her. In the video, Turner is heard saying "You're actually harassing me" and "I'm actually walking to my house" before falling to the ground. While on her back, she appears to scuffle with the officer, saying "Why? Why?" and then "I'm pregnant."

Investigators are trying to contact whoever recorded the video, because the person was a witness to the shooting, the lieutenant said.

"It's a tragic event for everybody involved," Dorris said. "Of course, our hearts go out to the family of the deceased as well as our officer."

On Tuesday afternoon, Turner's neighbors gathered not far from an orange ring painted on the apartment complex parking lot to mark where she was shot. Standing amid the modest brick and aluminum homes, one of Turner's neighbors said the incident frightened her.

Oh, my God. She was shot so close to home.

"It's just sad — very sad — when you see somebody for the past six months walking around," Jennifer Sims said. "Even though you don't talk to them, you keep an eye on them, you know. And then you wake up and realize, 'Oh, my God. She was shot so close to home.' That's scary, and very sad."

Baytown, a city of more than 75,000 people, is about 25 miles (40 kilometers) east of Houston. Its population is 35 percent white, 46 percent Hispanic and 16 percent Black, according to the U.S. Census Bureau.

Outside the city's police station Tuesday, about a dozen protesters gathered carrying signs with "No Justice. No Peace" and "Black Lives Matter" written on them.

Another Black person who has lost their life, for senseless violence. Five shots. Unarmed

"This is another Black woman who has lost her life," said Ashton P. Woods, an activist with Black Lives Matter Houston. "Another Black person who has lost their life, for senseless violence. Five shots. Unarmed."

Kevin Davis, a police detective and the author of a book on investigating police use of force, said it is impossible to make a proper assessment of Turner's shooting based only on the video and facts released so far.

Davis, who is not connected to the case, said the smartphone videos that have become common in police shootings can lead people to rush to judgment. "We owe it to everyone involved, including the decedent, to do a professional investigation," he said.

This story has been corrected to show that police now say the woman who was shot and killed by an officer was 44, not 45 as police initially said.