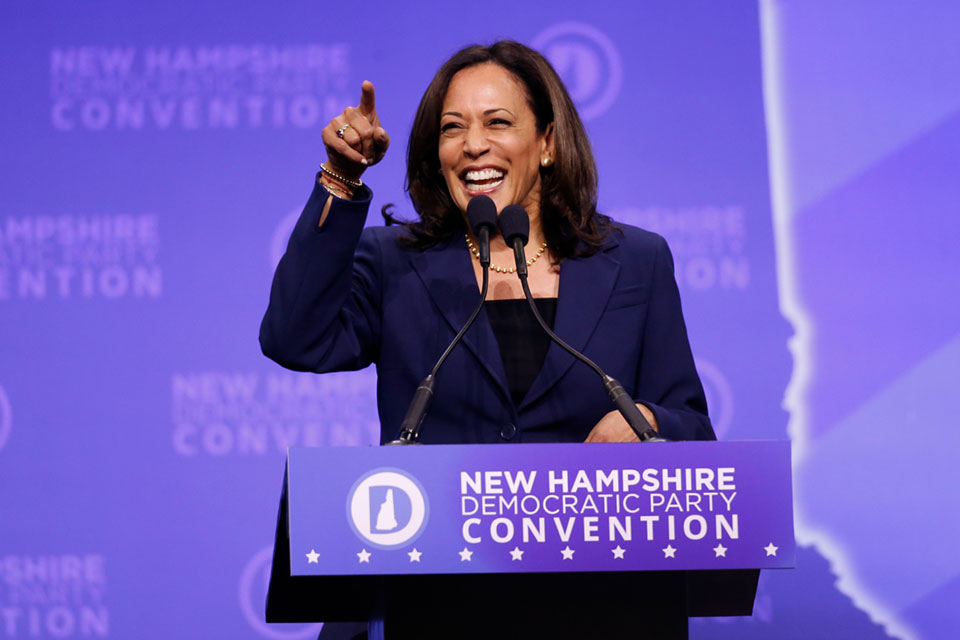 LONDONDERRY, N.H. (AP) — Seven months after Kamala Harris burst into the race for the Democratic presidential nomination with a flag-draped launch rally and the confidence of a front-runner, the California senator is facing persistent questions about whether she can recapture the energy of her campaign's opening days.

More than anything, it has been Harris' inability to maintain momentum that has worried some of her supporters. The high point of her summer came in the first debate, when she invoked her personal story to strike former Vice President Joe Biden on the debate stage over busing. But she struggled to build on what was ultimately a scripted, though highly effective, moment.

"She had the biggest launch event and the biggest debate moment. When someone is capable of that, it means they can do it again."

Harris remains in the top pack of candidates vying for the Democratic nomination, though is being outpaced in many polls by Biden, Bernie Sanders and Elizabeth Warren. The California senator is well-liked by voters and has a formidable on-the-ground operation in the early voting states. Her candidacy also holds the potential of energizing women and Black voters, two of the most important Democratic constituencies.

But she's facing some tough headwinds. She's struggled to identify a consistent position on health care , one of the most significant policy debates in the primary. During the stretch of time between Memorial Day and Labor Day, she has spent less time in the leading primary and caucus states than some of her rivals. More fundamentally, her rationale for seeking the presidency seems unfocused.

Harris brushed off questions about her sluggish summer following a recent town hall in New Hampshire.

"Look, we have at every one of our events, some of the biggest enthusiasm in terms of people responding to our message," Harris said. "I see a great deal of enthusiasm on the ground, and it is going to be a function of working hard and earning the vote of everyone, and that is what I intend to do."

A central challenge for Harris in the months ahead will be to offer a compelling — and succinct — reason she should be elected. Warren is fighting against a political and economic system she portrays as rigged against the working class. Sanders is crowing for a political revolution. Pete Buttigieg, the South Bend, Indiana, mayor who's also trying to maintain early momentum, is positioning himself as the face of generational change.

Harris' articulation of her theory of the case is less succinct. When she launched her candidacy, blocks from the courthouse where she began her career as a deputy district attorney, she said her campaign was a fight against those "trying to sow hate and division," and that she would "seek truth, speak truth and fight for the truth."

She has, at times, described herself as a "joyful warrior," and argues that she is uniquely qualified to "prosecute the case" against President Donald Trump, telling voters that "dude gotta go."

"When she's debating and she's on stage, she's very convincing in her argument, but I'm not sure exactly — I don't know her, in here, in her heart, why she's running and why she wants to be president," said Sarah Curtin, 42, of Rye, New Hampshire. "And I think that's really important for us to find out."

Democratic strategist Dan Pfeiffer, a former aide to Barack Obama, said that Harris's rationale "seems to be that she is the best person to "prosecute the case" against Trump, which speaks to her biography and the viral moments that have driven interest in her candidacy."

"It's a fair question to ask whether that's enough to win, but it just might be when the primary electorate is thirsting for a candidate who can disembowel Trump on the debate stage," he said.

Last month, Harris said that one of her biggest challenges is that she is relatively unknown.

"There are people in this race that have had national profiles for many years," she told reporters in Iowa.

"I'm still introducing myself to people."

There are also organizational concerns, with a large group of advisers and consultants spread out between Baltimore, Washington and California, creating bottlenecks in decision-making. Further complicating that process is the fact that Harris' sister — campaign chairwoman Maya Harris — is frequently on the road with the candidate, putting distance between her and other advisers.

Over the summer, the campaign signaled that Harris would be stepping up her presence in Iowa, promising activists and political powerbrokers there that she would be in the state far more often than during the first half of the year. A five-day bus trip around the Iowa state fair was well-received, but Harris hasn't been back to the state in nearly a month. Her trip to New Hampshire this weekend was her first time in-state since July. However, she has made more trips to South Carolina and Nevada than any other top-tier candidate.

Former South Carolina State Rep. Bakari Sellers, who has endorsed Harris' campaign, pointed to her strength there, despite Biden's enduring support among the state's African American voters. He noted that the primary calendar favors Harris after South Carolina, when multiple southern states and California, go to the polls.

"Unless the calendar changes, she still has a legitimate chance," Sellers said, suggesting that Biden's hold on the lead was fragile.

Warren, Buttigieg and Sanders "have not proven that they can win legitimate swaths of Black support," he added. "The trick to this is, neither has Joe Biden. Joe Biden has not won a primary state, ever. And so I think there is still a lot of game to be played."