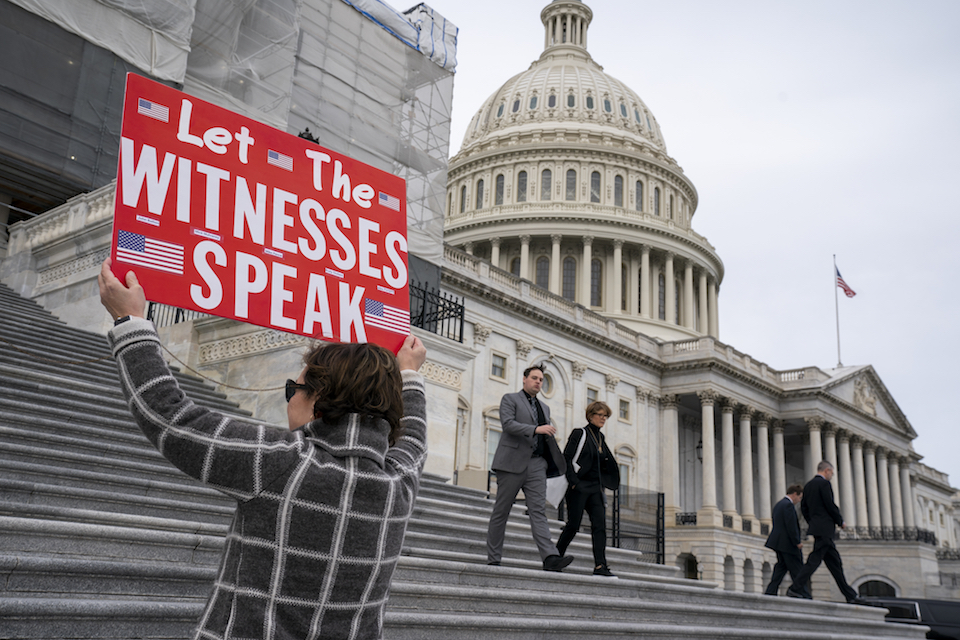 WASHINGTON (AP) — House Speaker Nancy Pelosi said Sunday that senators will “pay a price” if they block new witnesses from testifying in the impeachment trial of President Donald Trump. She said Americans expect a fair trial.

Pelosi, D-Calif., said the House plans to vote this week to transmit the articles of impeachment to the Senate for the historic trial on charges of abuse of power and obstruction of Congress over Trump's actions toward Ukraine. It will be only the third impeachment trial in American history.

“It’s about a fair trial,” Pelosi told ABC's “'This Week." "They take an oath to have a fair trial and we think that should be with witnesses and documents."

She warned: "Do that or pay a price.”

But a leading Republican had already dismissed Pelosi's tactics, saying the delay would have no effect on the expected outcome — acquittal by the GOP-controlled Senate.

“The Senate should not reward this behavior by the House. The Senate should end this trial as quickly as possible. That's what I intend to do. He will be acquitted. I hope and pray every Republican will reject what Nancy Pelosi did, and we'll pick up a few Democrats,'' said GOP Sen. Lindsey Graham of South Carolina, chairman of the Senate Judiciary Committee.

He predicted in a Fox News Channel interview on Saturday that the trial would end ”in a matter of days.''

Right before Pelosi was set to appear for the Sunday interview, Trump tweeted against Pelosi, calling her a derisive nickname, “Crazy Nancy.''

Asked about Trump's tweet, Pelosi said, "Every knock from him is a boost.”

The Democratic-run House is set to vote this week to send the articles of impeachment to the Republican-controlled Senate after Pelosi ended a more than three-week delay.

McConnell is reluctant to call more witnesses and has proposed a process similar to the last impeachment trial of President Bill Clinton in 1999 that would start the proceedings and then vote later on hearing new testimony.

Pelosi said senators need to consider new witnesses, including former national security adviser John Bolton, who has said he would be willing to testify.

Democrats are trying to put pressure on senators, particularly those up for reelection in 2020, to consider new testimony.

She defended her decision to delay sending the articles of impeachment against the president saying it produced new potential evidence and turned public attention on the upcoming trial.

The House voted more than three weeks ago to impeach Trump on charges that he abused his power by pressuring the president of Ukraine to investigate Democrats, specifically Trump political rival Joe Biden. Trump was also charged with obstruction of Congress for trying to block the House investigation.