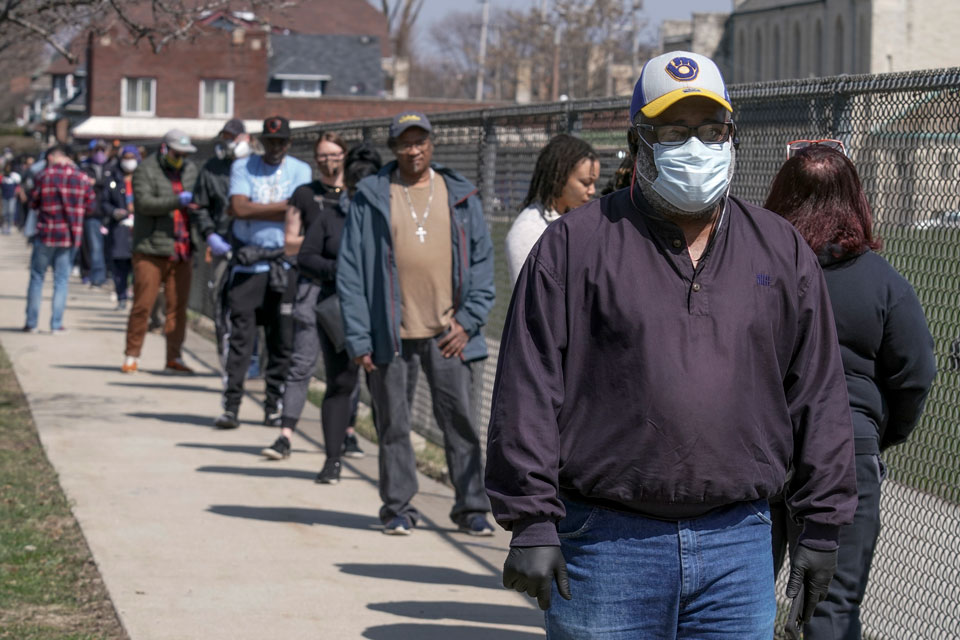 The analysis, “COVID-19 Silence Voters of Color in Wisconsin,” was conducted by data experts from Demos and All Voting Is Local, a project of The Leadership Conference on Civil and Human Rights. Reviewing voter data from last month’s Wisconsin primary, the groups found significant gaps in voter participation across the state – exposing existing flaws in our election system and the disproportionate impact of COVID-19 on Black and brown voters who already face significant structural barriers at the ballot box.

A full audio recording of today's press briefing on the analysis is available here.

Although a record number of absentee ballots were returned during the 2020 primary election in Wisconsin, overall vote counts do not tell us how COVID-19 is impacting access to the ballot box for different racial groups. While White wards had an average of 49 percent voter turnout, Black and Hispanic wards had an average of about 18 percent turnout.“The data is clear,” said Shruti Banerjee, senior policy analyst at Demos. “The troubling gap in voter turnout among racial groups indicates an immediate need for lawmakers to address the issues, both historic and current, that continue to silence Black and Brown voters.”

Before the early April vote, as the coronavirus pandemic continued to spread with infections and death rising precipitously, the conservative majority of the U.S. Supreme Court ruled with Wisconsin Republicans and refused to extend the deadline for mail-in ballots.

“Our analysis shows how COVID-19 has exaggerated problems in our election system,” said Dr. Megan A. Gall, All Voting is Local’s national data director, “We know African Americans and Latinos have long faced barriers to the ballot.

"These data begin to tell the story of what happens when these issues collide. Too often, data illuminate problems after the fact. We hope what we're finding now can be useful in stabilizing the general election for all Wisonsin voters.”

Polling stations from 200 to 5, many absentee ballots not received

The analysis further highlights that for wards with higher Black and Hispanic populations in Milwaukee, average voter turnout was 30 percent lower than the average voter turnout in White wards. And for the thousands of Wisconisn residents who risked their lives to vote in-person, health consequences were severe. Statistics from the first week of April show that Black residents made up almost half of Milwaukee county’s COVID-19 cases and 81 percent of the county’s COVID-19 related-deaths.

“There are normally 200 polling stations in Milwaukee and on election day we learned there would only be five,” said Robin Reese, Milwaukee resident and voter. “I know so many of my friends and neighbors who never received their absentee ballots by mail and were scared to go to their polling station to vote.

"People should not have to risk their lives to vote.

"This is not the way that our elections should be held. The people of Milwaukee deserve better and we all deserve to be heard.”

While voting rights advocates support the Milwaukee city’s latest measure to curb damaging disenfranchisement on communities of color, state and local officials are being called upon to do more and ensure no one is forced to choose between their health and their right to vote.

The analysis can be found here.