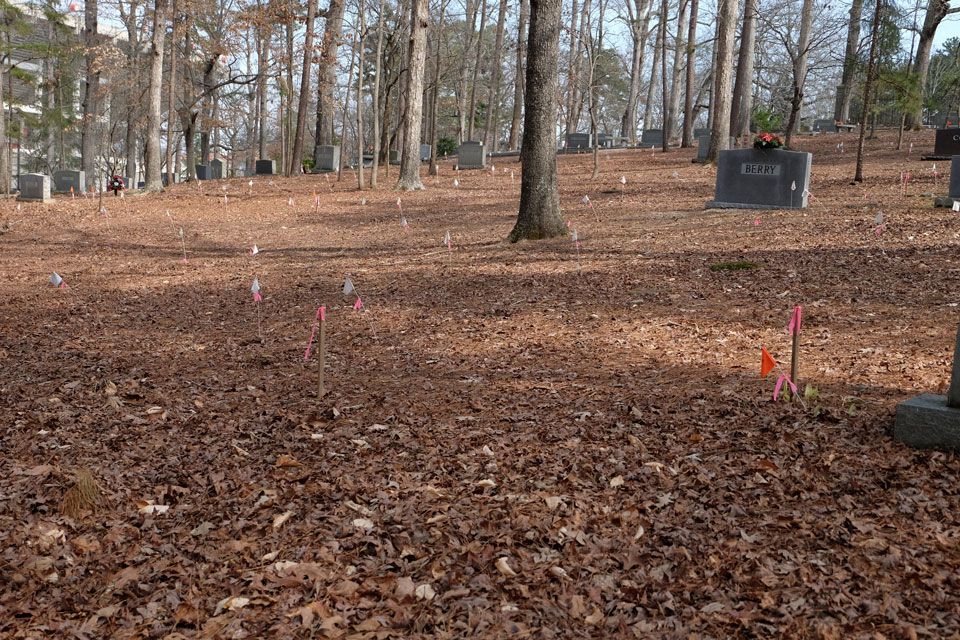 CLEMSON, S.C. (AP) — On the sloping side of a cemetery on the campus of Clemson University, dozens of small white flags with pink ribbons have replaced the beer cans that once littered a hill where football fans held tailgate parties outside Memorial Stadium.

The flags are a recent addition, marking the final resting places of the enslaved and convicted African American laborers who built the school, and before that, the plantation on which it sits. Hundreds more of the flags are dotted among existing gravestones, and until lately, most visitors stepped unknowingly over their remains. 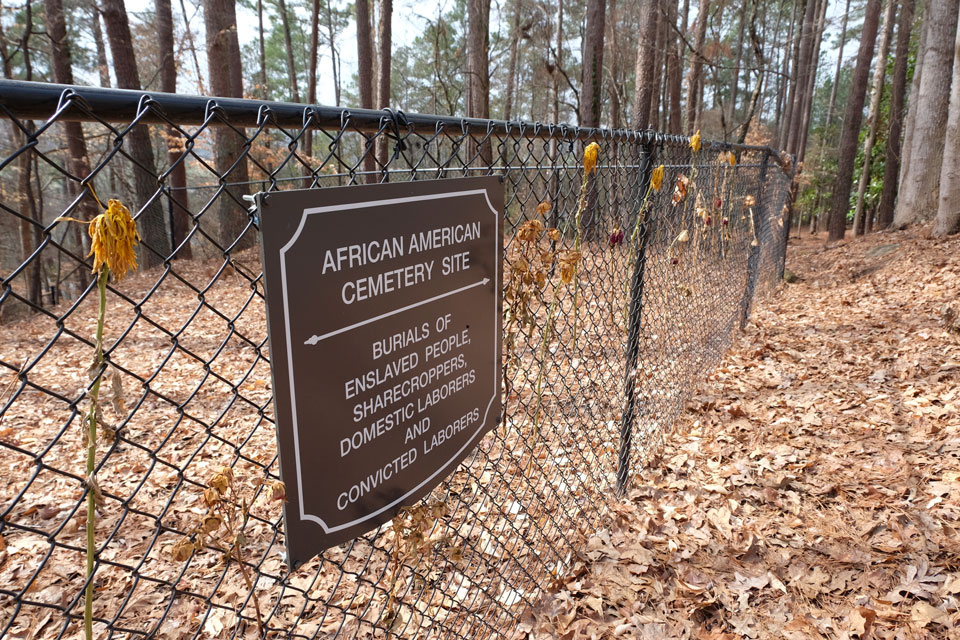 Flowers adorn a fence marking an African American cemetery site at Woodland Cemetery in Clemson, South Carolina on Sunday, Feb. 28, 2021. Students at Clemson University who found an unkempt graveyard on campus last year sparked the discovery of more than 600 unmarked graves most likely belonging to enslaved Black people, sharecroppers and convicted laborers. The revelation has Clemson working to identify the dead and properly honor them amid a national reckoning by universities about their legacies of racial injustice. (AP Photo/Michelle Liu)“Cemetery Hill” has served as the final resting place for some of Clemson’s faculty and trustees for nearly a century. Now, researchers have identified more than 600 previously unmarked African American graves, some overbuilt by the marked graves of white people, dating back to the early 1800s.

The revelation has prompted Clemson to reconsider the Woodland Cemetery's function on campus amid a national reckoning by universities to properly acknowledge their legacies of slavery and forced labor.

Rhondda Thomas, a professor of African American literature at Clemson, leads a team working to piece together the identities of the dead in this “sacred space,” and memorialize “those who have been so dishonored and disrespected over time,” she said.

“As a university we have a responsibility to teach our students and our campus community how to embrace complex, painful, troubling history, and we need to start with our own,” Thomas said in an interview. 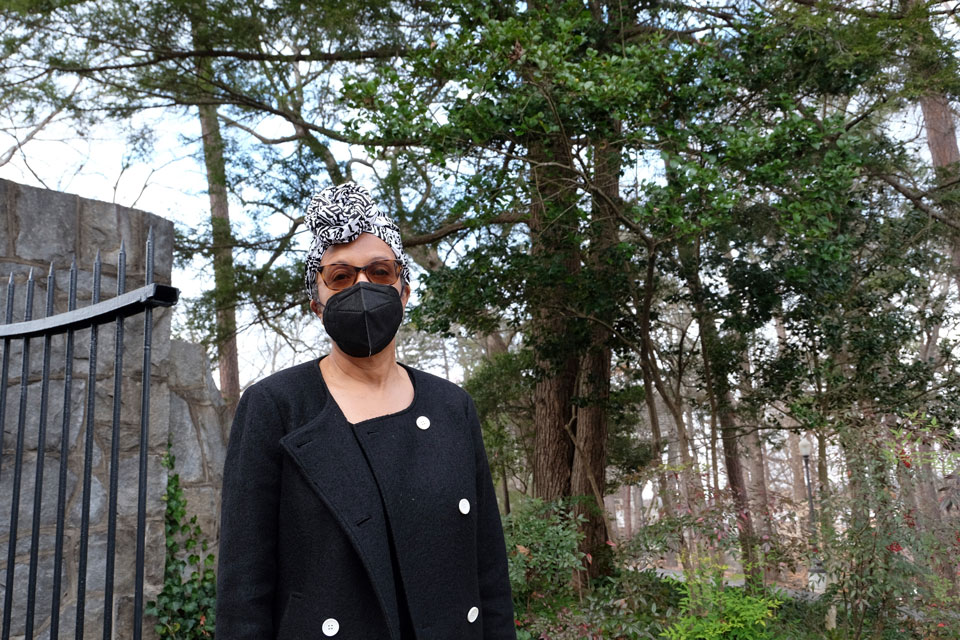 Rhondda Thomas, the Calhoun Lemon Professor of Literature at Clemson, poses for a portrait in front of Woodland Cemetery on campus in Clemson, S.C. on Sunday, Feb. 28, 2021. Thomas, who researches the stories of African Americans in the university's history, is spearheading the project to contextualize and memorialize the cemetery after more than 600 previously unmarked graves likely belonging to enslaved people and other Black laborers were discovered last fall. (AP Photo/Michelle Liu)The Fort Hill plantation was established by John C. Calhoun in 1825, the same year he became the nation's 7th vice president. Calhoun later became a U.S. senator, and zealously defended slavery before the Civil War. His family bequeathed the plantation to South Carolina in 1888, leading to the university's creation. The state then built the campus using convicted laborers, many of them arrested on petty charges to force them to work without pay.

Thomas has spent much of her tenure documenting the experiences of African Americans in the university's history through a project known as “Call My Name.” A related tour she designed includes a fenced-off area where the university relocated a few dozen African American graves in the 1960s.

“The narrative tells the story of Clemson’s indebtedness to Black labor for its existence," Thomas said. "I thought it was very important for the public, and for the campus community, to be able to access that history.” 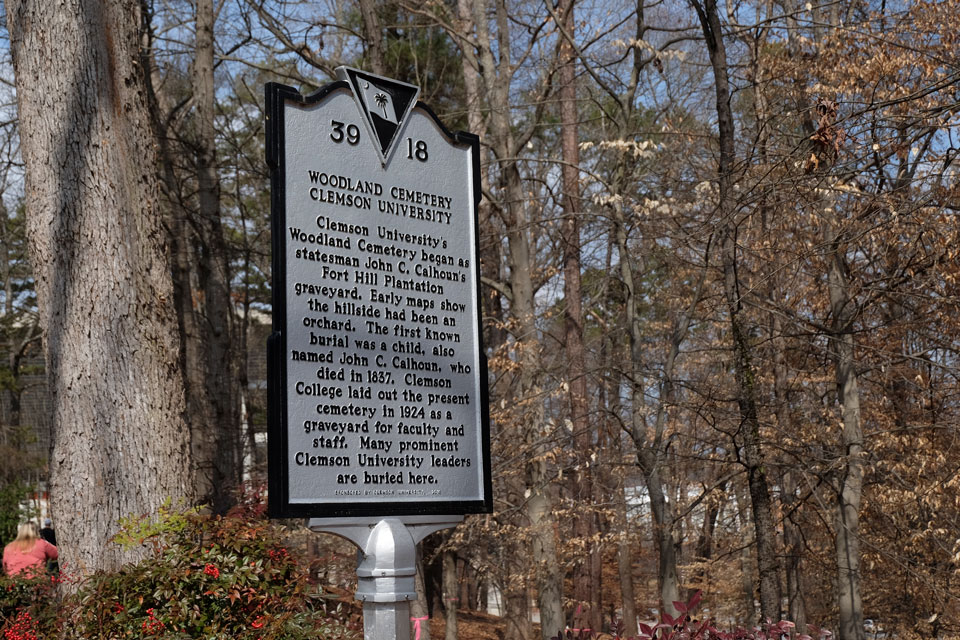 A marker stands at the entrance of Clemson's Woodland Cemetery in South Carolina on Sunday, Feb. 28, 2021, in Clemson, S.C. Students at Clemson University who found an unkempt graveyard on campus last year sparked the discovery of more than 600 unmarked graves most likely belonging to enslaved Black people, sharecroppers and convicted laborers. The revelation has Clemson working to identify the dead and properly honor them amid a national reckoning by universities about their legacies of racial injustice. (AP Photo/Michelle Liu)Campus archives and court documents show the school has known for decades about some of the unmarked graves below the hilltop spot where the Calhouns buried their first family member in 1837.

A college committee recommended honoring them with a permanent marker in 1946, though none was installed. In 1960, Clemson was allowed by a judge to disinter some of the remains to facilitate the “orderly and proper development of the campus.” A 2003 planning document noted that parts of the site could contain unmarked burial plots.

But Clemson only began investigating in earnest last year, after two undergraduates, upset over the graves' condition, approached Thomas.

Sarah Adams, now a senior, said she’d become distraught, after taking one of the campus tours Thomas created, over the stark discrepancy between the neatly maintained graves of faculty and trustees and the unkempt state of the African American plots. 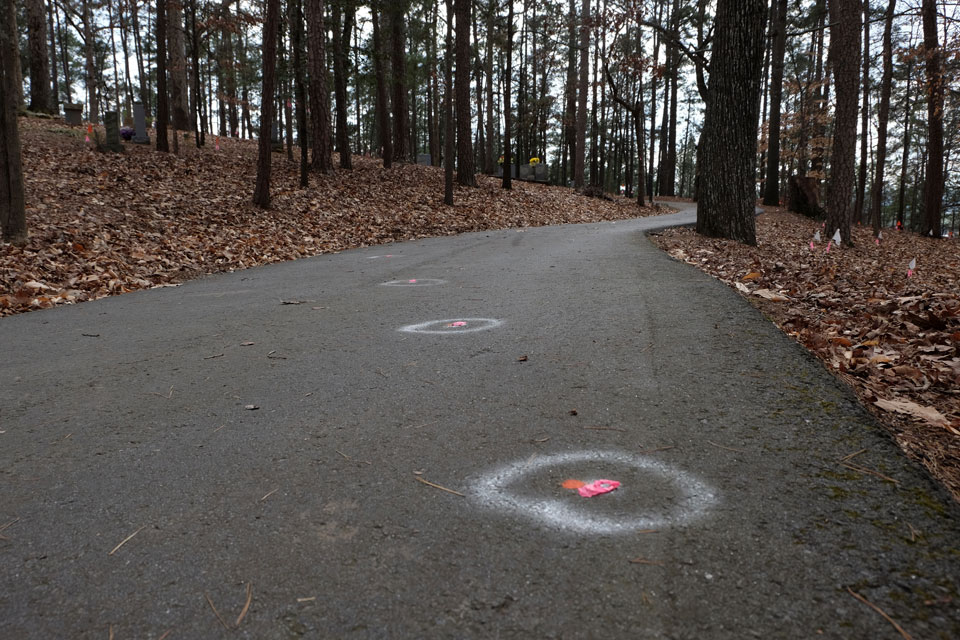 Spray-painted white circles and pink flags nailed into a walkway denote previously unmarked graves in Woodland Cemetery in Clemson, S.C. on Sunday, Feb. 28, 2021. Researchers say the graves could belong to enslaved people and sharecroppers who worked on the plantation that Clemson was built on, and convicted laborers who helped construct Clemson College during the turn of the 20th century.(AP Photo/Michelle Liu)Thomas connected Adams and another concerned student, Morgan Molosso, with cemetery grounds staff and University Historian Paul Anderson, prompting the effort to clean up and memorialize the site. They secured funding from the provost's office to search for graves with ground-penetrating radar. Three rounds of searches have now increased the number to 667, as of January 2021.

Documents posted online by the university show that after Calhoun died in 1850, the U.S. Census recorded 50 slaves on the plantation. Inventoried as property when his son bought Fort Hill four years later, they ranged from a 100-year-old woman named Phebe to multiple children under two. A dozen years later, near the end of the Civil War, 139 enslaved people were living on the plantation.

Field stones and archival documents had provided some indication of how many people were buried, but seeing the hundreds of flags interspersed among the graves of Clemson employees left Thomas speechless as she grappled with the proof of a burial ground desecrated over time. 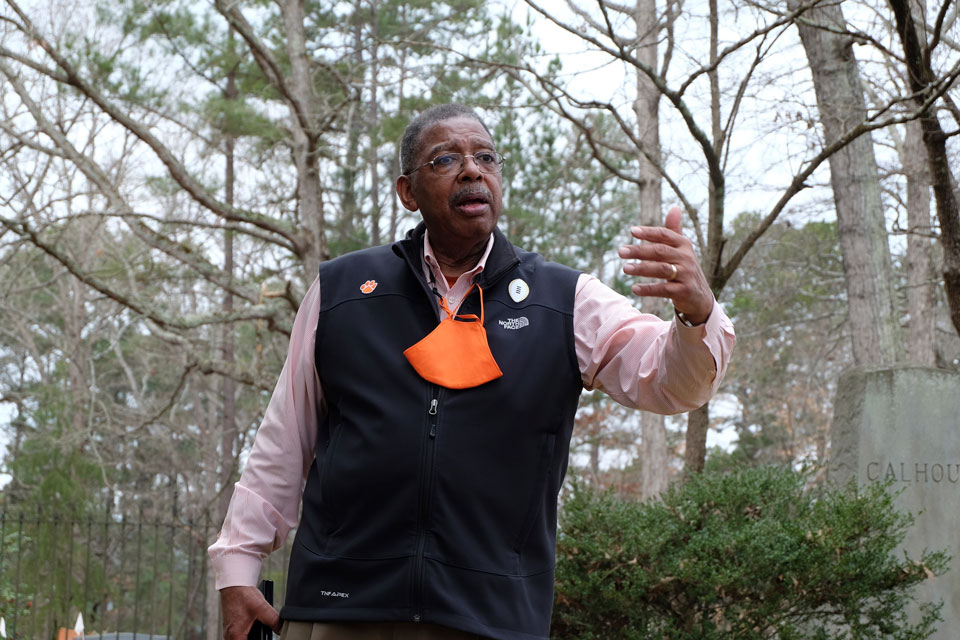 James E. Bostic, a former Clemson board member and the first African American to earn a doctorate at the school, talks to vistors at the Calhoun family plot at Woodland Cemetery in Clemson, S.C. on Sunday, Feb. 28, 2021. Students at Clemson University who found an unkempt graveyard on campus last year sparked the discovery of more than 600 unmarked graves most likely belonging to enslaved Black people, sharecroppers and convicted laborers. The revelation has Clemson working to identify the dead and properly honor them amid a national reckoning by universities about their legacies of racial injustice. (AP Photo/Michelle Liu)Touring the site now requires stepping gingerly around dozens of white circles spray-painted onto the ground. In some places, graves have been paved over to create walkways. In others, many flags are clustered around each other, possibly marking where extended families buried their dead for generations, researchers said.

There is no way to know whether Clemson football games are played over the remains of slaves. Construction of the stadium would have destroyed any graves, said tour guide La’Neice Littleton, a postdoctoral fellow. But the white circles extend to within steps of the stadium wall.

Reparations in the form of tuition proposed

The initial discovery of 215 unmarked graves amid the Black Lives Matter movement last summer led some students and faculty to call for broader changes in how the school treats Black students and surrounding African American communities. Clemson is South Carolina's second-largest university, but just 6% of its students are Black, in a state where some 27% of residents are.

Thomas has suggested that reparations could come in the form of tuition scholarships for descendants of the people buried in the cemetery, akin to a program Georgetown University launched in 2019.

Already, some professors are incorporating the cemetery's uncomfortable history into classes. Admissions office guides include it in campus tours. Thomas said she's also assembled a council of surrounding community members to help shape a memorial to the men, women and children whose forced labor made Clemson what it is today.

Liu is a corps member for the Associated Press/Report for America Statehouse News Initiative. Report for America is a nonprofit national service program that places journalists in local newsrooms to report on undercovered issues.