New US Climate Pledge: Cut Emissions 50% This Decade, but Can Biden Make It Happen? 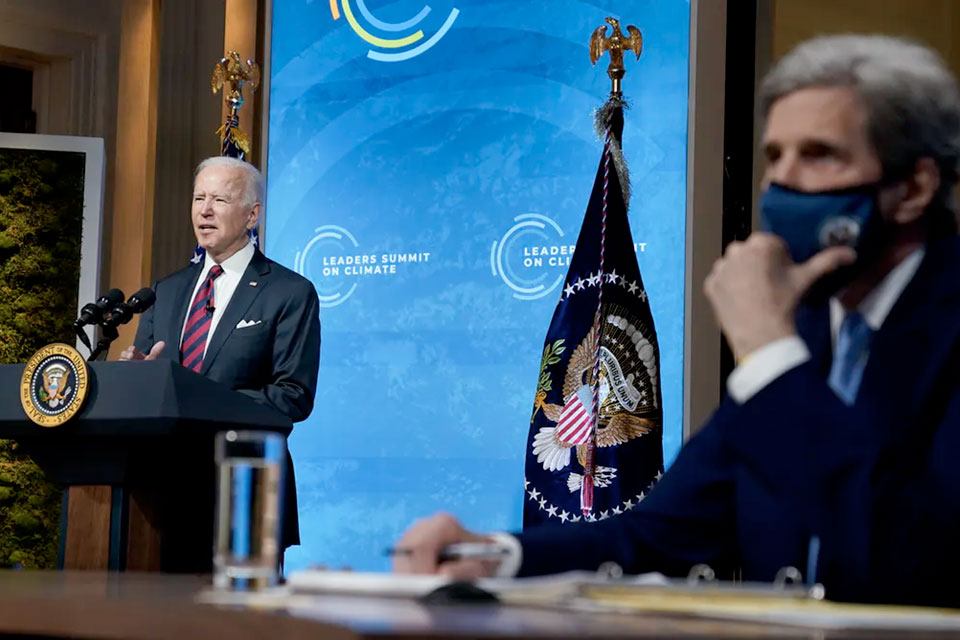 President Joe Biden announced an ambitious new national climate target at the world leaders’ climate summit on April 22. He pledged to cut U.S. carbon emissions in half by the end of this decade – a drop of 50-52% by 2030 compared to 2005 levels – and aim for net-zero emissions by 2050.

The new goal is a big deal because it formally brings together the many different ideas on infrastructure, the budget, federal regulatory policy and disparate actions in the states and industry for transforming the U.S. economy into a highly competitive, yet very green giant. It also signals to the rest of the world that “America is back” and prepared to work on climate change.

Stopping global warming at 1.5 degrees Celsius – the aim of the Paris climate agreement – will require an immediate global effort that can transform energy systems and make emissions plummet at rates never observed before in history. Statements from the 40 world leaders at the virtual summit reflected both ambitious visions for that future – and the reality that words don’t always match actions on the ground.

The U.S. government illustrated its new commitment in documents filed with the United Nations. The pledges use 2005 as the baseline.

Formally, the new U.S. target is what’s known under the Paris climate agreement as a “nationally determined contribution.” In effect, it is a nonbinding pledge to the rest of the world. Beyond the headline figures, Biden’s pledge pays attention to the need to adapt to the climate changes already underway and build resilience.

With the U.S. pledge, about two-thirds of the current global emissions come from countries that have now committed to reach net zero emissions by mid-century.

We’ve both been involved with climate policy and the international negotiations for decades, and these new goals show real momentum.

But will the new U.S. pledge have an impact on emissions that’s as huge as the pledge sounds?

Can the U.S. meet its new goal?

Already there’s been a lot of gushing about the boldness of the U.S. goal, by companies, advocacy groups, and academic think tanks, often pointing to studies that find a 50% emissions cut is achievable.

Our chief concern is industrial reality – cutting emissions by half within a decade implies transforming the electricity system, transportation, industry and agriculture.

These systems don’t turn on a dime. The goal setting is the easy part. It is largely a combination of technical feasibility with political palatability. The tough work is getting it done.

Pretty much everything will need to line up quickly — policies that are credible and durable, along with industrial responses. As often happens with technological change, most analysts are overestimating how quickly things can transform in the near term, and probably underestimating how profound change will have to be into the more distant future. 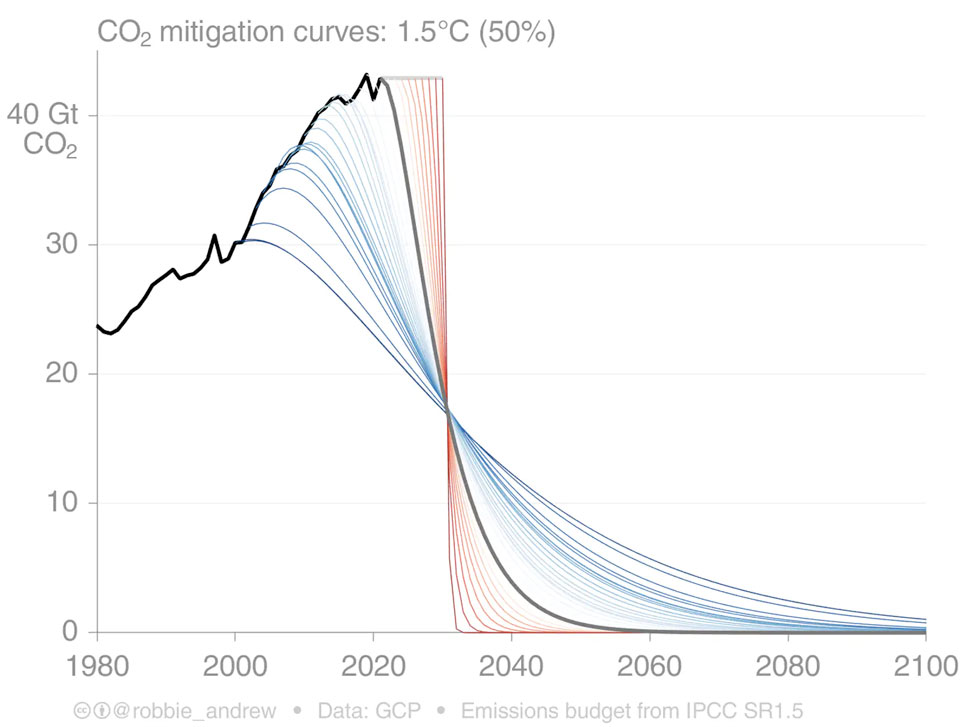 The sooner global emissions decline, the smoother the route to zero emissions by 2050 will be. The lines show potential global pathways. Robbie Andrew/CICERO Center for International Climate Research, CC BY

The electricity sector is the key early mover in the U.S. and globally. Research from the Berkeley Lab shows that, over the last 15 years, the U.S. has slashed power-sector carbon emissions in half relative to projected levels.

The Biden administration now has a goal for electricity to be carbon-free by 2035. Nearly every study that shows a 50% drop in U.S. emissions is feasible is based on the observation that the power sector will cut emissions at a fast clip.

For all the progress in electricity, pushing that sector to be net zero soon will create tensions and tradeoffs. For example, distress from the sharp decline of the coal industry is already evident in communities across Appalachia.

Politics and a climate summit

The new commitments were announced in the context of the White House’s first major diplomatic event on climate change — a meeting of 40 major emitting countries, including China, Russia, India, the UK and several European countries.

The U.S. is the world’s second-largest greenhouse gas emitter, and one of the highest in emissions per person. But its emissions are less than 15% of the global total, so it is essential that whatever happens in the U.S. be linked to a global effort. That’s why credibility matters so much. If the U.S. is to re-establish leadership on climate change, its efforts are only as good as followership by the rest of the world. 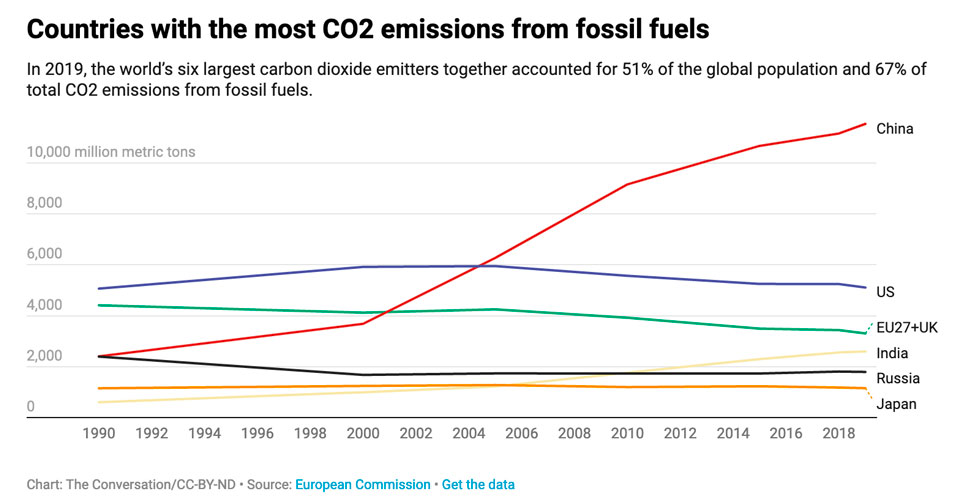 But the Biden administration has to move carefully.

Tempting as it is to tighten the screws on emissions, efforts that are too aggressive will easily become fodder for the political opponents and industries that have undermined climate efforts in the past.

The shift in climate politics is important to watch. Biden has a barely functional majority on Capitol Hill, and the real politics of climate change aren’t simply about the technical scenarios of cutting emissions with cleaner technologies. They are also about how society transitions.

The US still needs to prove itself

The White House had high expectations for the summit, including expecting several countries to announce new commitments. The U.K. pledged just ahead of the summit to cut emissions 78% by 2035, and the EU announced a provisional deal on a 55% emissions cut by 2030.

The virtual summit also drew Russian President Vladimir Putin, Chinese leader Xi Jinping and Brazilian President Jair Bolsonaro – three frequent U.S. adversaries and major contributors to climate change through fossil fuels or deforestation. Putin promised big action and to “significantly cut the accumulated volume of net emissions” in Russia, and Bolsonaro promised to protect the Amazon rainforest, but not end illegal deforestation for another 10 years. Both highlight how easy it is to promise great things at climate summits even when one’s track record points in the opposite direction.

Grounding this frenzied ambition in the messy work of policy design and implementation is far removed from a virtual event.

One indicator of the actual success of the summit may be China. U.S.-China diplomacy in the run up to the UN Paris climate meeting was widely seen as essential to its success five years ago. This year, when presidential climate envoy John Kerry met with his Chinese counterpart a few days ahead of the April 22 summit, the joint statement concluded with a somewhat generic agreement to cooperate on climate change and ensure the world meets the Paris goals.

After four years of the Trump administration’s antagonism toward climate efforts, and undermining of U.S. credibility overseas, and with so much domestic work on climate still needed, a U.S.-hosted summit may have been premature. The intense diplomatic efforts to pressure other countries to make announcements at the event seemed out of touch with the U.S. need to get its house in order first.

The White House pledge is bold, but it remains long on adjectives and short on credible verbs. Whether it will have an impact on either domestic action or helping to convince the world that the U.S. is a trusted and durable partner on climate change remains to be seen.

This article was originally published on The Conversation.