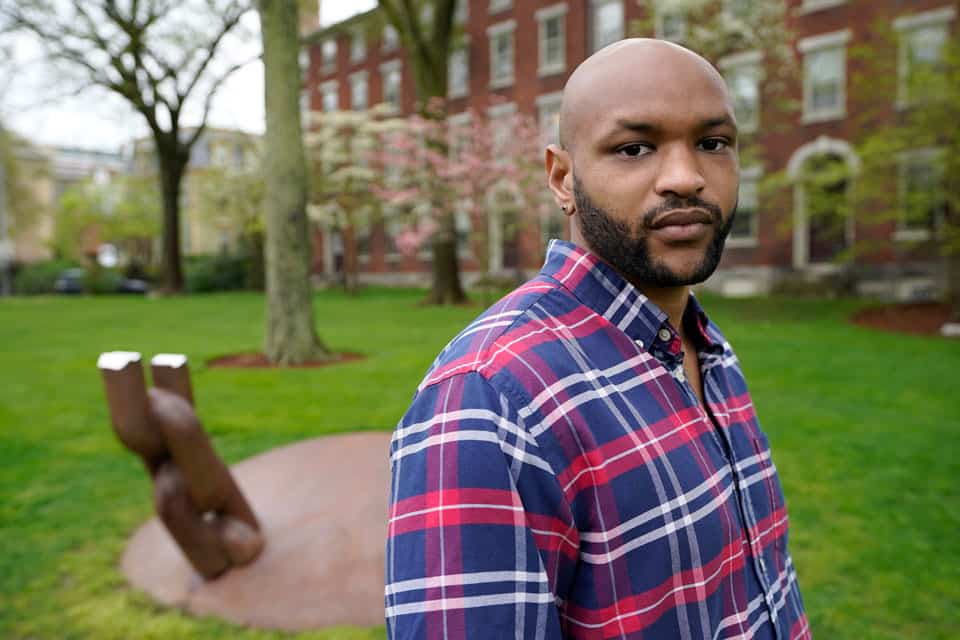 PROVIDENCE, R.I. (AP) — For Brown University students, the Ivy League college's next step in its yearslong quest to atone for its legacy of slavery is clear: Pay up.

Nearly two decades after the Providence, Rhode Island, institution launched its much-lauded reckoning, undergraduate students this spring voted overwhelmingly for the university to identify the descendants of slaves that worked on campus and begin paying them reparations.

At the University of Georgia, community activists want the school to contribute to Athens' efforts to atone for an urban renewal project that destroyed a Black community in the 1960s to make way for college dorms.

And at Georgetown University in Washington, D.C., there’s growing dissatisfaction among some slave descendants about the Catholic institution’s pioneering reparations efforts.

Nearly a year after the killing of George Floyd by Minneapolis police sparked the latest national reckoning on racism, student and community activists from New England to the Deep South are demanding institutions take more ambitious steps to atone for past sins — from colonial-era slavery to more recent campus expansion projects that have pushed out entire communities of color.

“There’s been a shift in America,” said Jason Carroll, who was student council president during the spring referendum at Brown University. “We’re at a different place.

"Just a few years ago, it was controversial to say ‘Black Lives Matter.’”

The 22-year-old Maryland native, who graduated this month, argues Brown has taken nearly every conceivable step to atone for its past — save for making slave descendants whole.

The school released an exhaustive historical report in 2006 and followed it up with the dedication of a slavery memorial in 2014, among other efforts. An “Anti-Black Racism” task force is expected to deliver recommendations soon for how the school can further promote racial equity. But university spokesperson Brian Clark stressed it’s not clear whether the panel, which was formed following last summer’s racial unrest, will address reparations.

“This shouldn’t just be an academic question. There are real families that have been burdened and harmed by this — and probably still are.”

Students at Harvard are similarly calling for reparations after years of headline-grabbing announcements from the school, including dropping the law school emblem, which was derived from the crest of a slave-owning family. A panel looking at the university's slave legacy plans to release its findings and recommendations later this year.

At the University of Chicago, students are frustrated that the university continues to distance itself from its slavery ties, even as it touts efforts to advance racial equity and justice, said Caine Jordan, a graduate student who co-authored a recent report on the school's fraught racial history.

Last year, the university removed markers honoring U.S. Sen. Stephen Douglas, but maintained the Mississippi slave plantation owner donated land to an older version of the school and had “ no connection ” to the current one.

“All of it rings hollow if you're founded on Black pain, and you’re not willing to acknowledge that,” Jordan said.

A university spokesperson declined to respond, but said University President Robert Zimmer will provide an update soon on the school's racial equity efforts.

In Athens, Georgia, students and community groups complain the University of Georgia has largely stayed silent on the city's recent efforts to atone for the displacement of some 50 Black families to make way for new dorms for the school in the 1960s. 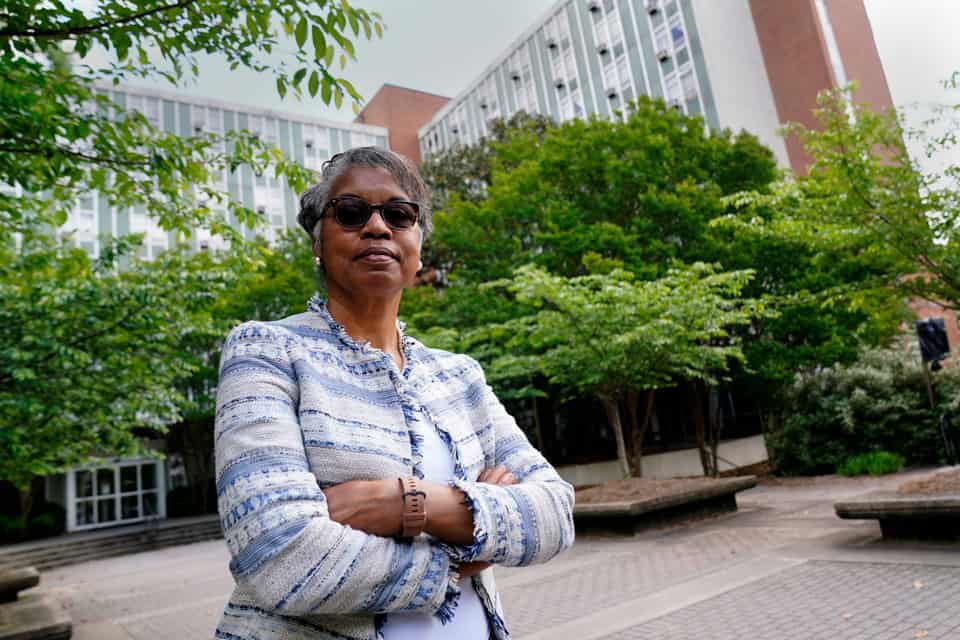 Hattie Whitehead Thomas poses for a portrait on the campus of the University of Georgia in Athens, Ga., on Thursday, May 6, 2021, where a Black neighborhood was razed in the 1960's to make room for dorms. The 72-year-old Athens resident grew up in the destroyed Linnentown neighborhood. “UGA has got to do more. It’s got to come to the table and acknowledge what it did,” she says. (AP Photo/John Bazemore)Earlier this year, Mayor Kelly Girtz signed a resolution acknowledging the taking of the homes under eminent domain, and setting into motion a process to provide “equitable redress." Student groups rallied Wednesday to call attention to the issue, among other racial justice demands.

“UGA has got to do more. It’s got to come to the table and acknowledge what it did,” said Hattie Whitehead Thomas, a 72-year-old Athens resident who grew up in the destroyed Linnentown neighborhood.

The university responded in part that the dorms have housed tens of thousands of students “from all races and socioeconomic backgrounds — providing those students with the transformational benefits of a higher education.” 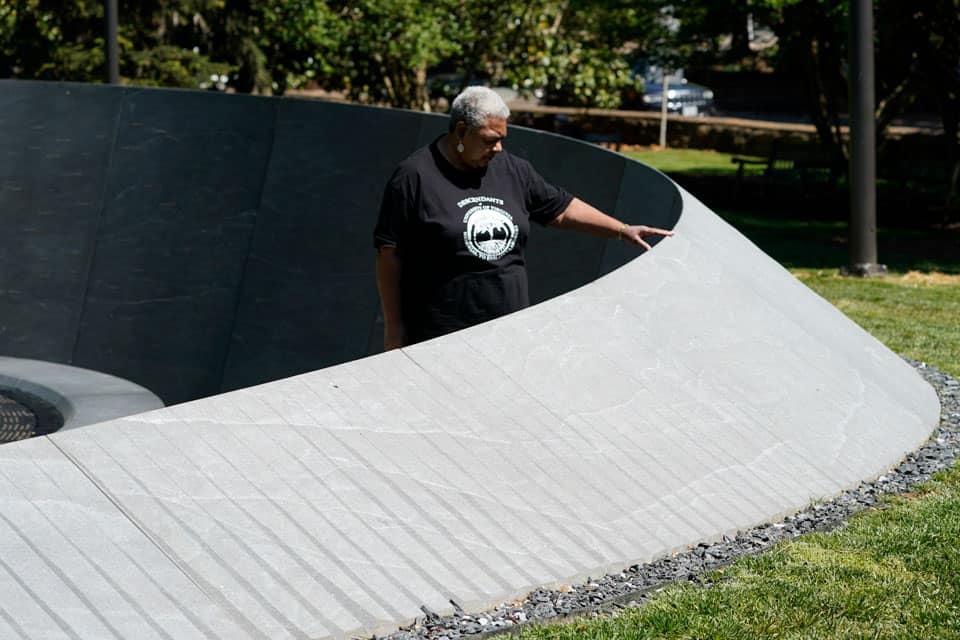 Cauline Yates, a descendant of one of Thomas Jefferson's slaves, said she hopes the law compels the flagship University of Virginia, which Jefferson founded, to provide academic scholarships and economic development projects for descendants. 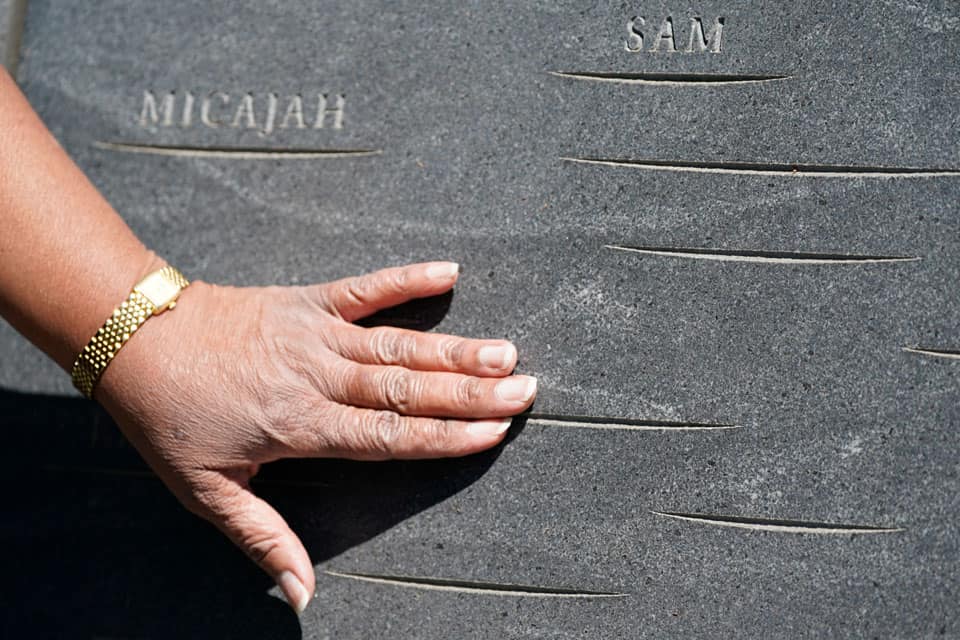 Cauline Yates, descendant of one of Thomas Jefferson's slave mistresses, points out names inscribed in the walls of the Memorial to Enslaved Laborers at the University of Virginia in Charlottesville, Va., Thursday, May 6, 2021. (AP Photo/Steve Helber)“It’s time for them to stand up and honor our ancestors,” said the 67-year-old Charlottesville resident, who works at the university and co-founded the advocacy group Descendants of Enslaved Communities at UVA.

Brian Coy, a university spokesperson, said it's premature to say how UVA will meet the new reparations requirement. But he noted the school has already met the first provision of the law — to honor and identify the slaves — with its Memorial to Enslaved Laborers dedicated last month.

Back at Georgetown, the Jesuit university's reparations efforts are meant to atone for the local Jesuit province selling around 272 slaves to settle the school’s debts in the 1800s.

Ruth McBain, a Georgetown spokesperson, said the university hopes to award the first grants from a new $400,000-a-year fund for community-based projects benefiting slave descendants sometime this year, and will work with the campus and descendant communities on that effort. 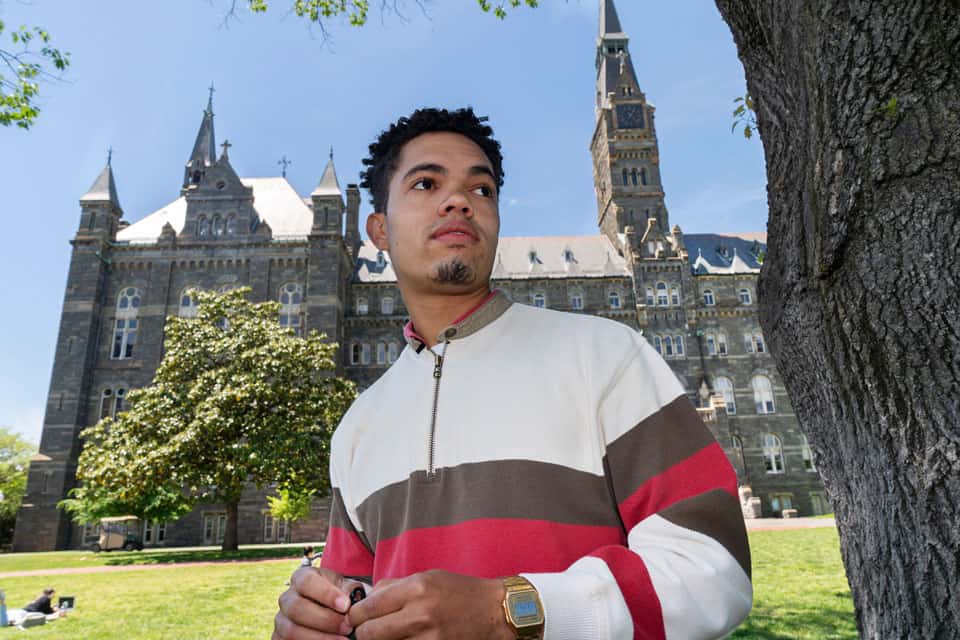 Shepard Thomas, a recent Georgetown University graduate and a descendant of slaves sold by Jesuits to keep the school open, poses for a portrait on the campus in Washington on Thursday, May 6, 2021. One of the main concerns is how funds committed to reparations work will be spent, and whether slave descendants will have adequate say in the process, according to Thomas. “The fear is that the university will use these funds for their own purposes,” the 23-year-old New Orleans native said. “The university is trying to control the narrative, and we’re trying to prevent that.” (AP Photo/Jacquelyn Martin)The recent launch of a $1 billion “ racial reconciliation ” foundation by the Jesuit order that founded the university is another “important step in building trust and partnership” with the descendant community, she added.

But one of the main concerns among descendants and students is how committed funds will be spent — and whether descendants will truly have adequate say in the process — according to Shepard Thomas, who graduated from Georgetown last year and was among the first to benefit from the school’s new legacy admission status for descendants of the 272.

“The fear is that the university will use these funds for their own purposes,” the 23-year-old New Orleans native said. “The university is trying to control the narrative, and we’re trying to prevent that.”

Davarian Baldwin, an American studies professor at Trinity College in Hartford, Connecticut, isn’t optimistic many colleges will ultimately meet the demands of students and activists, even with the renewed activism.

“Universities will do as little as they can get away with,” he said.

Indeed, at Brown, university leaders have long touted the 2007 launch of an endowment to benefit the Providence public school system as a key part of its slavery atonement.

But the university only fully funded its $10 million pledge to the troubled, state-run school district last year after the mayor and others complained.

Carroll also argues the effort, while laudable, has nothing to do with compensating Black communities for slavery. The school district, after all, is overwhelmingly Latino.

“That’s not really a solution," he said. "In a way, it’s even more insulting.”