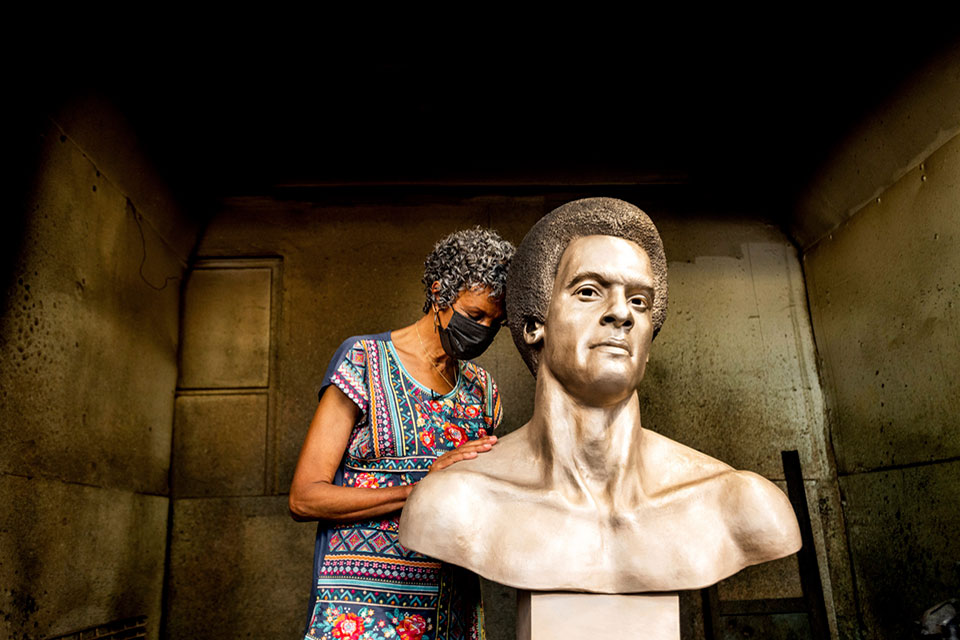 It was the first time in decades that she’d seen his glow.

At the California foundry that fired a bust of Black Panther Party co-founder Huey Percy Newton, his widow supervised as a bronze caster put finishing touches on what is to become the first permanent public art piece honoring the party in the city of its founding.

“It just glowed, like he did,” Fredrika Newton said. “His skin just glistened.”

The unveiling is scheduled for Sunday at Dr. Huey P. Newton Way and Mandela Parkway, near the spot where Newton was murdered in 1989. It comes as Panther alumni, descendants and others gathered to mark the 55th anniversary of a party that has long been both celebrated and vilified.

Newton remains a divisive figure. Many people still dismiss him as the leader of a band of beret-wearing, gun-toting hustlers -- and no doubt would deplore the prospect of an American city memorializing him with a statue. Others say his failings were a drag on the Black Power movement. 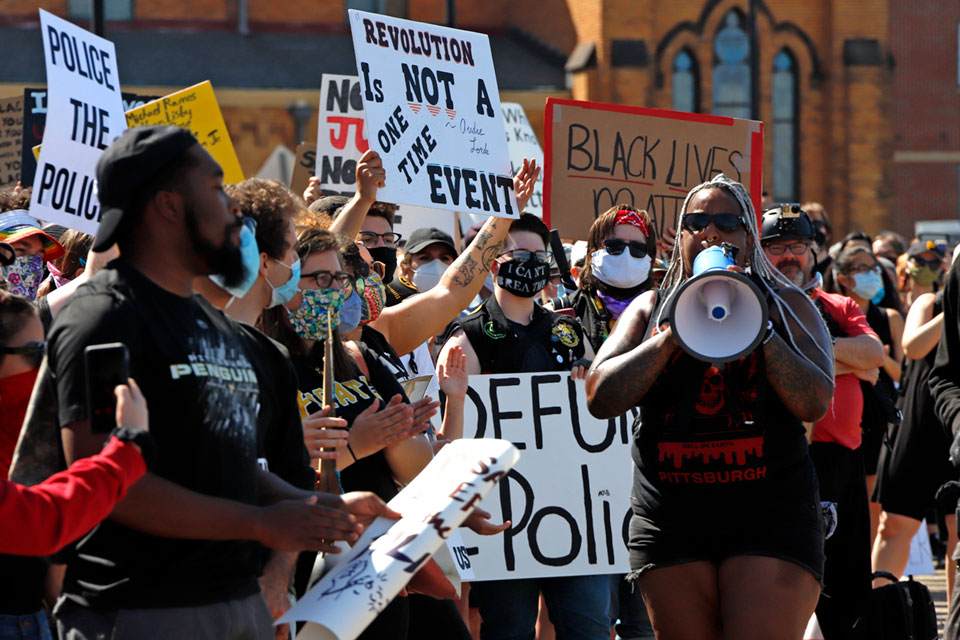 FILE - In this June 7, 2020, file photo, protesters participate in a Black Lives Matter rally on Mount Washington overlooking downtown Pittsburgh to protest the death of George Floyd, who died after being restrained by Minneapolis police officers on May 25. A bust of Black Panther Party co-founder Huey Newton is scheduled to be unveiled in Oakland, Calif., on Sunday, Oct. 24, the first permanent public art piece honoring the party in the city of its founding. Newton remains a divisive figure. His influence on the Black Lives Matter movement is undeniable. (AP Photo/Gene J. Puskar, File)

Still, many love him to this day, venerating him as a man who, with Bobby Seale, sought to unite all Black, impoverished and oppressed people against what they considered America’s racist, capitalistic and unjust interests. His influence on the Black Lives Matter movement is undeniable.

“Huey was maybe the only man I’ve ever known that was a truly free man,” said his older brother, Melvin Newton.

“He was universal. He felt that no one could be on his back, if he stood up. And he always stood ram-rod straight.”

The youngest of seven children, Newton was born on Feb. 17, 1942, in Monroe, Louisiana.

His parents, Walter and Armelia Newton, moved the family to Oakland during a wave of the Great Migration, when the promise of work and less overt racial oppression lured thousands of African American families out of the Jim Crow south.

Newton struggled with his education, unable to read or write in high school even as he was arrested for petty crimes. It was only after graduation from high school that his real education began; a self-taught reader, he studied the works of W.E.B. DuBois, Frantz Fanon and James Baldwin.

By his late 30s, he had a doctorate in social philosophy from the University of California at Santa Cruz, and he was well on his way to global fame and notoriety.

Black Panther Party for Self Defense

After meeting at a community college in Oakland, Newton and Seale founded the Black Panther Party for Self Defense in October 1966.

Newton, the minister for defense, and Seale, the chairman, were frustrated with the largely Southern civil rights movement spearheaded by the Rev. Martin Luther King Jr., which they felt had failed to address the problems of Black people in the North and West.

“My sense is that he sort of pushed himself out there to be this public, confrontational figure on the streets,” said Widell, now the history department chair at the University of Rhode Island.

“But I don’t know that that was his natural inclination, personality-wise. He was more of a theoretician. And I think he was pretty surprised at how rapidly (the Panthers) grew in exposure, whether it was fame or infamy.” 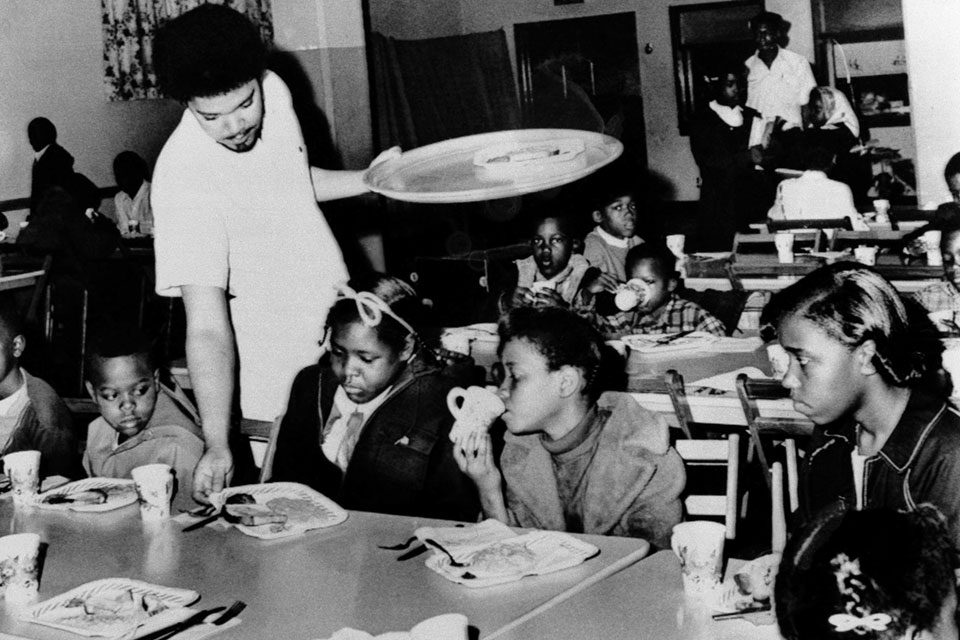 File - In this April 16, 1969, file photo, Bill Whitfield, member of the Black Panther chapter in Kansas City, serves free breakfast to children before they go to school. The Panthers were known, among other things, for free breakfast programs for school children and a pioneering sickle cell disease testing program. (AP Photo/William P. Straeter, File)

Newton and Seale wrote the party’s Ten Point Program, which laid out the party’s beliefs and its demands. The party’s Survival Programs were beloved in nearly 70 communities the U.S. and abroad where it had chapters. The Panthers were known, among other things, for free breakfast programs for school children and a pioneering sickle cell disease testing program.

Panthers’ antagonistic relationship with law enforcement has long cast a shadow over its legacy. In 1967, Newton was jailed for the shooting death of an Oakland police officer who had pulled him over. Although Newton was himself shot during the encounter and denied being responsible for the officer’s death, he was tried and convicted of voluntary manslaughter in 1968.

While imprisoned, the “Free Huey” campaign helped make him a symbol of racial injustice in the American criminal legal system. 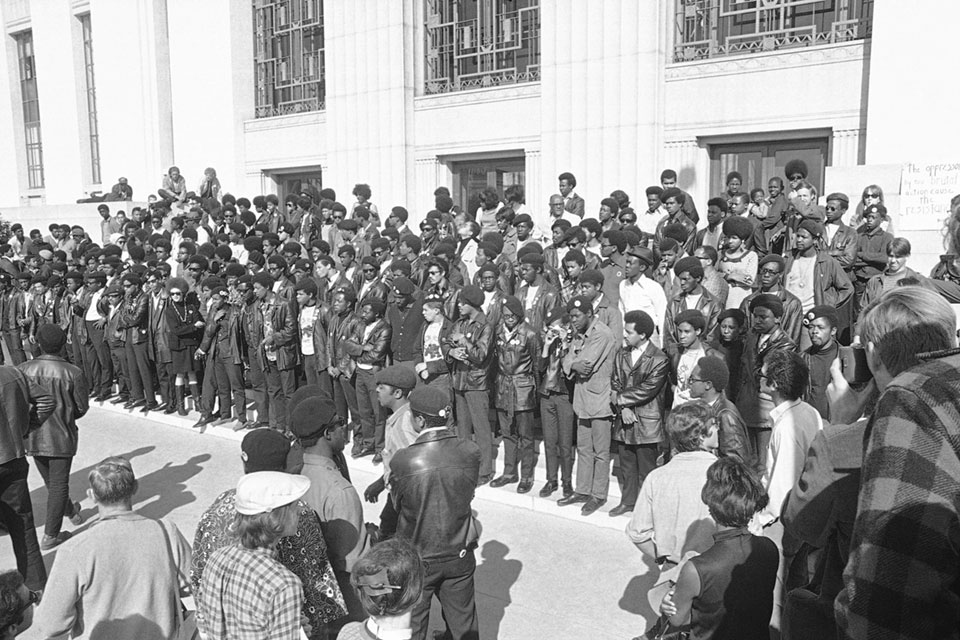 His conviction was overturned in 1970, and he emerged from prison to discover the party had grown well beyond Oakland. Its image largely centered on armed self-defense, including violent and lethal encounters between Panthers and police, both in Oakland and around the country.

“I think we also need to recognize the very real ways in which a lot of the violence that surrounded the Panthers was instigated and provoked by law enforcement themselves,” Widell said.

Newton sought to rehabilitate the Panthers’ image, urging members to focus on the popular Survival Programs. He advocated for the rights of Black community to defend itself from police, but changed his view that party members should openly carry guns as a check on police brutality. 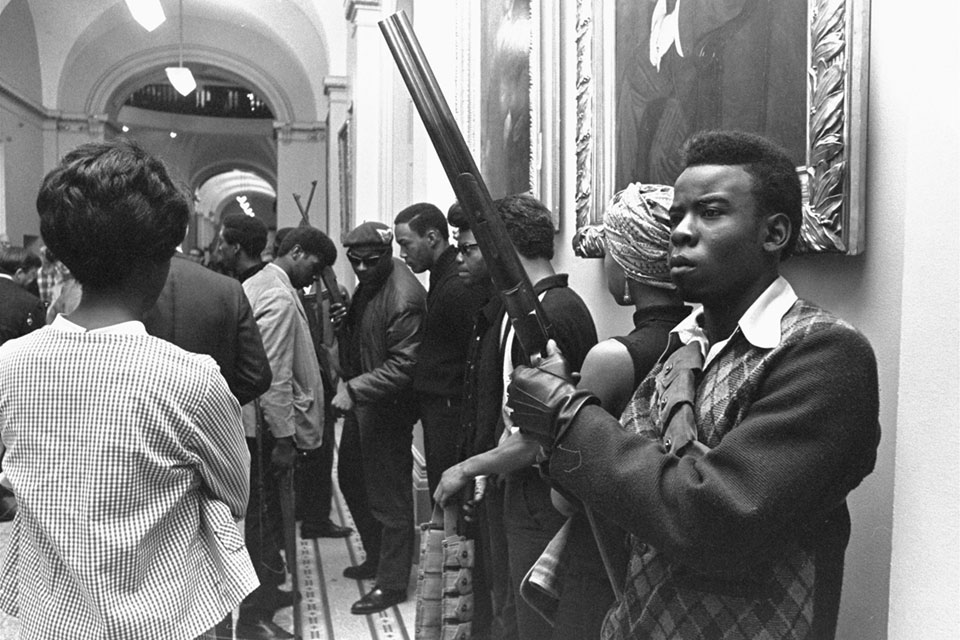 FILE - In this May 2, 1967, file photo, armed members of the Black Panthers Party stand in the corridor of the Capitol in Sacramento, Calif. Huey Newton sought to rehabilitate the Panthers' image, urging members to focus on the popular Survival Programs. He advocated for the rights of Black community to defend itself from police, but changed his view that party members should openly carry guns as a check on police brutality. (AP Photo/Walt Zeboski, File)

Peter Coyote, the American actor and founder of the Diggers, a San Francisco improv troupe that worked with Panthers early on, grew close to Newton. The actor said the two communicated by phone almost weekly while Newton was incarcerated.

“He was funny,” Coyote said, “and he was also deadly serious. He knew he was putting his life at risk and he was playing for keeps. And when you meet people like that, you don’t forget them.”

Although it had been in decline for several years, the Black Panther Party didn’t fold until 1982. That was after years of police surveillance, as well as dwindling national membership, infighting, allegations of embezzlement and scandals in which Newton was implicated and criminally charged.

Newton’s addictions to alcohol and drugs overtook him. On Aug. 22, 1989, he was murdered in Oakland, California, by a drug dealer. He was 42. 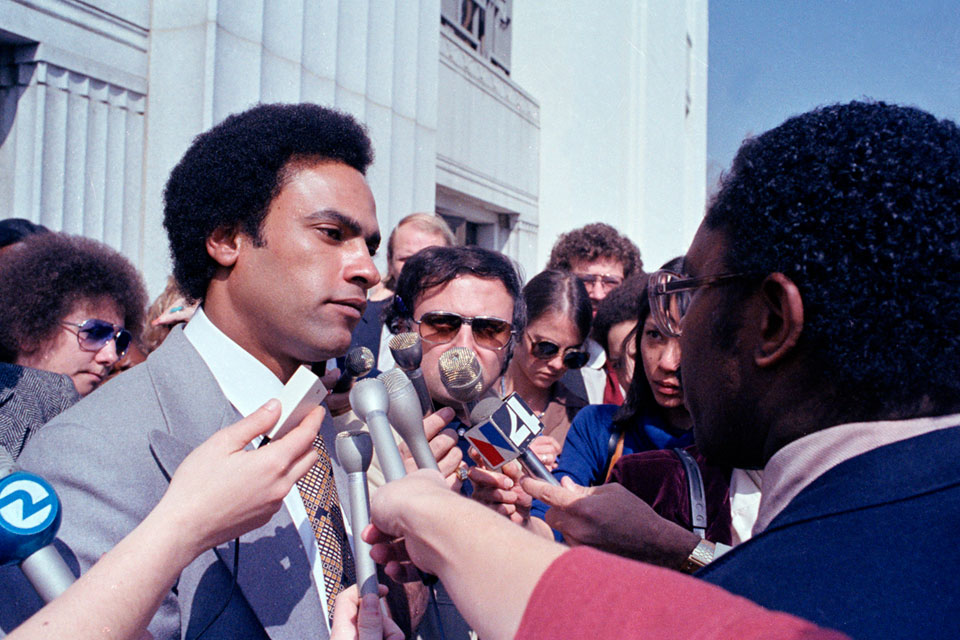 FILE - In this March 7, 1979, file photo, former Black Panther leader Huey Newton speaks to reporters outside the courthouse in Oakland, Calif. A bust of the co-founder is scheduled to be unveiled in Oakland, on Sunday, Oct. 24, 2021, the first permanent public art piece honoring the party in the city of its founding. Newton remains a divisive figure. (AP Photo/Sal Veder, File)

Newton’s bust, Fredrika Newton said, is meant to celebrate someone whose life and contributions to American history mean much more than his decline and demise.

“I would like for people to see him as a total human being,” said Newton, co-founder of the Dr. Huey P. Newton Foundation. “That he wasn’t just an iconic figure in a wicker chair."

"This was a man with vulnerabilities, with feelings, with insecurities, with frailties, just like anybody.”