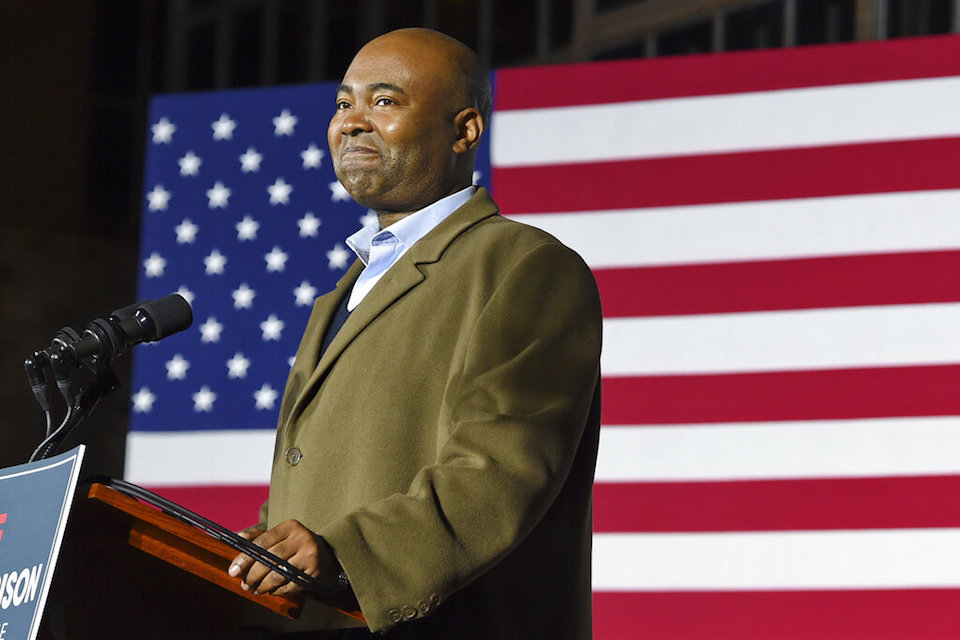 He is not particularly close to the White House. He's never won statewide office or a seat in Congress. And just last year, he lost a high-profile Senate race by double digits.

But if you ask him, Jaime Harrison will tell you he is uniquely prepared to lead a Democratic Party confronting fierce Republican obstruction, intense infighting and the weight of history heading into next year's midterm elections.

He will tell you of his own childhood of poverty in rural South Carolina, where he ate cereal with water instead of milk before eventually becoming an attorney, a congressional aide, the first Black state party chair, a prodigious fundraiser and now, at 45 and the father of two young children, the chair of the Democratic National Committee.

He will also tell you about the intense pressure he feels to stave off political disaster in 2022.

“Let me tell you, man, it is a big weight. It is a tremendous weight," Harrison said in an interview from a makeshift television studio in the basement of his South Carolina home. “My experiences are the experiences that we need at this moment to help really thread a needle. This is going to be challenging."

Will he get support to do the job?

Harrison is leading a party in peril.

A year after seizing control of Congress and the White House, Democrats are grappling with painful losses across several states in last week's off-year elections that raised serious concerns about a much larger red wave in 2022. Suddenly, the Democratic optimism of this spring has been replaced by doubt as party officials openly ponder whether they have the right message, the right messengers and the right political strategy.

The finger-pointing has already begun.

DNC members, who accepted Harrison as President Joe Biden's pick for chair in January, have begun to grumble about his limited engagement with the rank-and-file activists and state party officials who do much of the day-to-day heavy lifting in Democratic politics. Others believe the White House isn't giving him the freedom he needs to do the job well.

“Jaime Harrison knows how to do that job. I fear that he may not be allowed to do the job,” said Rep. Jim Clyburn, D-S.C., whom Harrison describes as a father figure and mentor.

Clyburn declined to criticize the White House directly but questioned whether Harrison is being “hamstrung by people who never ran for anything."

The White House declined to comment publicly, while Harrison downplayed any tension as a simple matter of navigating a new relationship with Biden's chief political emissary, Jen O'Malley Dillon. Harrison said they meet two to three times a month, and after getting to know each other better, they're building a friendship.

“Are there challenges that we all have to navigate in this process because the DNC is not normally involved in the midterms? Yes, there always will be, and there are now,” Harrison said. “I’m going to continue to push, I’m going to continue to be creative, but Jen and I are working hand in glove in terms of trying to make this work.”

These days, Harrison is doing most of his work from his basement in Columbia, South Carolina, his home of the last five years. The DNC's Washington headquarters is still largely closed because of pandemic concerns. So, like thousands of Americans working from home, he is balancing his work life with the demands of raising two young sons, scheduling video meetings with the White House and television interviews around nap times, school activities and even the occasional COVID-19 scare.

From his home base 500 miles (800 kilometers) south of Washington, he acknowledges that he is fighting tremendous odds. Political parties that hold the White House have lost congressional seats in virtually every midterm election in the modern era. And Democrats are clinging to the narrowest majorities in both chambers of Congress.

Polling suggests there is cause for concern.

Gallup found in September that 55% of Americans had a negative view of the Democratic Party, the highest disapproval in five years. At the same time, majorities of Americans believe the nation is on the wrong track with Democrats in charge.

Democratic concerns deepened earlier this month after sweeping losses across Virginia, New Jersey, New York and Pennsylvania. The party's Trump-era advantages eroded in the suburbs, while their struggle in rural areas worsened.

Harrison rejected a popular takeaway from the off-year drubbing that Democrats should no longer focus on former President Donald Trump as a centerpiece of their message to voters. Such a strategy failed in Virginia, among other states.

“The odds are Donald Trump is gonna run for president in 2024. And he’s the odds-on favorite to get the Republican nomination,” Harrison said. “And so I think it’d be foolhardy for us to say, ‘Let’s forget Donald Trump because he’s not here.' He’s going to have his presence felt all over the 2022 midterms.”

At the same time, Democrats believe that a positive message focused on their legislative accomplishments will also lift their standing — if they can effectively sell their achievements to voters.

Earlier in the year, Democrats enacted a $1.9 trillion pandemic relief package, which sent $1,400 checks to most Americans and provided billions more in support for people and businesses affected by the pandemic. And last week, Democrats, with some Republicans, approved the biggest infrastructure package in generations, a $1 trillion measure that will fund years' worth of major construction projects in every state in the nation. Biden will sign the bill into law on Monday.

A week after Democrats approved the infrastructure package, however, the party has yet to unveil a comprehensive plan to promote their accomplishment, which polls suggest is overwhelmingly popular despite pockets of conservative opposition.

In an attempt to get things started, Harrison participated in four cable television interviews this week. At the same time, a handful of DNC leaders have made television or radio appearances. And local elected officials in Pennsylvania, Wisconsin, Georgia, North Carolina and Michigan held local press conferences to highlight the infrastructure bill.

The party is planning a “slow simmer” strategy to sell the infrastructure package, he said, a shift from the burst of attention surrounding the passage of the Democrat-backed pandemic relief plan earlier in the year.

“What’s the use of really jumping high into this right now, and then dropping off in December, and then by February or March, people are like, ‘What? What happened?’” Harrison said. “The goal is to burn this into the minds of the American people and to have it sustained as we move forward into the 2022 midterms.”

Soon, the DNC will begin rolling out a new wave of TV ads, radio spots and digital ads featuring a combination of Biden and everyday Americans talking about the impact of the infrastructure package on their lives. The party would then focus on highlighting the flood of nationwide groundbreakings and ribbon cuttings expected in the subsequent months.

“This has to be a long-term and sustained thing," Harrison said. “It just can’t be a flash in the pan.”

Beyond Washington, some Democrats aren't so sure the DNC should be focused on selling infrastructure at all — at least, not now.

Voters not aware of benefits of infrastructure bill

“He’s selling it, but people ain't buying it,” Verdejo said of the Democrats' achievements. “That’s not his fault because he’s getting his messaging from the White House. Infrastructure is great and all, but that’s way down the road, and I’m paying 17 bucks for a family pack of chicken wings.”

Verdejo continued: "It’s disappointing to see a guy like that with so much potential almost being handcuffed."

Harrison can connect with people

Meanwhile, the memories of 2010 are persistent.

That year, Democrats went into the first midterm election of Barack Obama’s presidency struggling to sell another major policy achievement, “Obamacare,” to frustrated voters. Democrats ultimately lost 63 seats in the House and six in the Senate.

Virginia Sen. Tim Kaine, who led the DNC from 2009 to 2011, says that much of the responsibility of selling Biden's accomplishments will fall to Harrison, even if the White House ultimately controls the big decisions on messaging and strategy.

“The leader of the party is the president, and when he goes out, he has the loudest microphone of anybody,” Kaine said. “But the DNC chair does many, many more political events and many, many more calls to rally the troops.”

“The fact that he’s a young guy, African American, he’s from a state that’s not the bluest state, this gives him the ability to connect with a lot of folks,” Kaine added. “He’s very effective at it.”

Harrison has another advantage that Kaine did not in 2010.

The infighting must stop

Democrats struggled to sell the Affordable Care Act to midterm voters in part because Obama personally didn’t like having to sell the party’s accomplishments, Kaine said. The Biden White House, Kaine suggested, seems more committed to ensuring that voters give Democrats credit for major achievements on the pandemic and infrastructure — and Biden’s Build Back Better agenda, if approved.

But well-publicized Democratic infighting on Capitol Hill between competing factions has clouded the party's message. And Harrison is worried.

He said it's critical for Democrats from the party's moderate and progressive wings to come together on Capitol Hill to enact Biden's agenda.

“All of this infighting, it has to stop. It has to stop,” he said. “We have to be on the same page. We have to pass these bills. Get them done and then get out on the ground and sell the hell out of them.”

Harrison admits he does not have enough clout on his own to persuade his party's warring factions to come together. So for now, he's focusing on the things he can control. A big piece of that is fundraising.

Harrison was Biden's pick for DNC chair, in part because of the extraordinary fundraising success he had in his underdog campaign against South Carolina Republican Sen. Lindsey Graham last year. Harrison's campaign raised an eye-popping $109 million, although he lost the election by 10 points.

By any measure, he has carried that fundraising acumen to the DNC.

So far in 2021 alone, the DNC and its allied Democratic Grassroots Victory Fund has raised more than $127.6 million, the most ever for a nonpresidential year. The committees currently boast $74.5 million in the bank.

The DNC has also announced plans to invest $23 million in state parties ahead of the 2022 midterms, including a new “red state fund” to put Republicans on the defensive in traditionally Republican-leaning states.

The commitment to state parties has drawn praise from people like Ray Buckley, the New Hampshire Democratic Party chair, who praised Harrison's personal relationships with the committee's large delegation of rank-and-file members and state party leaders. He noted that Harrison served as the South Carolina Democratic chair and then as a senior DNC aide before become the national chair, which allowed him to develop connections to members across the country.

“He has the backing of the membership and the trust of the membership,” Buckley said. “But we certainly are aware that when you have the White House, there are different challenges. You’re not a free agent."

Meanwhile, Harrison has not lost sight of the big picture: History suggests that Democrats will soon lose their House and Senate majorities. But he insists there is hope for his party.

“We can buck history. We can make our own history,” he said. "The question is whether we can get all together in order to do so. That is the real question.”