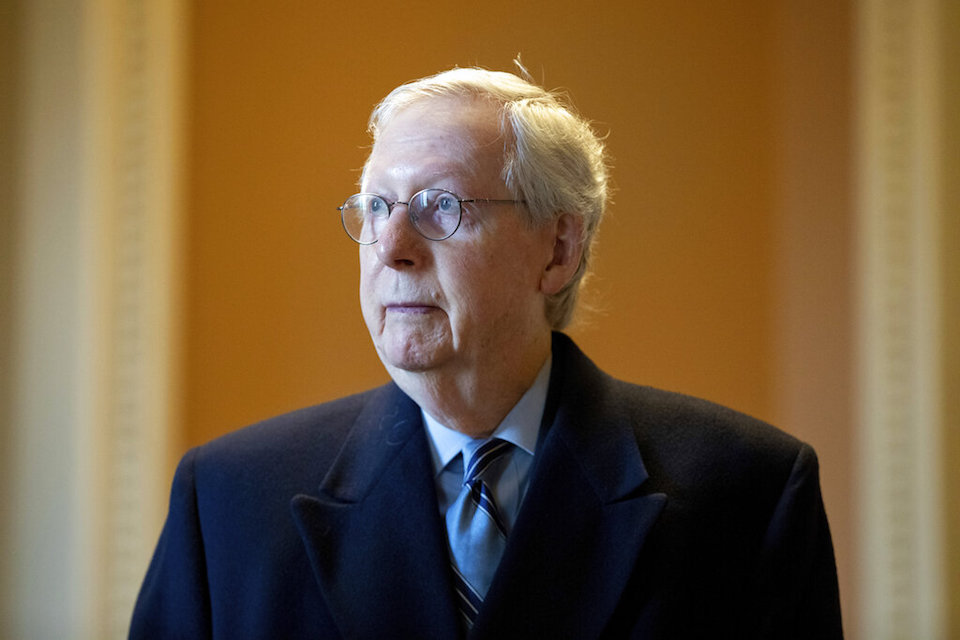 LOUISVILLE, Ky. (AP) — Senate Minority Leader Mitch McConnell pushed back Friday against the uproar over a comment he made about African American voters, calling the criticism directed his way “outrageous.”

McConnell had been accused of racism for saying that “African American” voters cast ballots at similar rates to “Americans.” The comment implied that Black voters are somehow not American and underscored the concerns of voting rights advocates that Republicans in state legislatures across the country are explicitly seeking to disenfranchise Black voters.

Following a speech Friday at an annual conference in Louisville, the Republican leader said he misspoke Wednesday when he made the comment during a Washington news conference.

“I’ve never been accused of this sort of thing before, and it’s hurtful and offensive,” he said. “And I think some of the critics know it’s totally nonsense.”

McConnell on Wednesday had said that "African American voters are voting in just as high a percentage as Americans.” McConnell explained on Friday that he should have said the word “all” before “Americans.”

He also defended his record on race by noting that he attended the Rev. Martin Luther King’s March on Washington in 1963. He also said he helped organize a civil rights march at Kentucky’s state Capitol and was present when President Lyndon Johnson signed the Voting Rights Act in 1965.

When asked what he would say to those who had been offended by his words, McConnell said he would discuss his record relating to voting rights, and brought up his role as a mentor to Kentucky’s Attorney General Daniel Cameron, who is Black and one of many Republicans who came to the minority leader's defense this week.

“I think he would confirm with you that I recruited him to run. I’ve supported him, and I’m proud of him,” McConnell said. “I have had African American speechwriters, schedulers, office managers over the years.”

Charles Booker, a Kentucky Democrat running for the U.S. Senate, had been among many who had blasted the Republican earlier in the week. Booker, who is Black, did not back down from criticizing McConnell on Friday.

“Mitch McConnell wants you to know it’s fine for him to block Voting Rights because he has Black friends,” tweeted Booker, who unsuccessfully ran for McConnell’s seat in 2020 and is challenging GOP Sen. Rand Paul this year.

McConnell tried to rebuff concerns among Democrats that GOP state lawmakers across the country are trying to disenfranchise minority voters by pointing to record-high turnout for all voters in the 2020 election.

Federal legislation like the kind he and other GOP lawmakers blocked on Wednesday also wasn't necessary, he said, because the Voting Rights Act was still law and concerns over specific state voting laws could be worked out through the court system.

“They co-opted Congressman Lewis’ name, stuck it on a bill that really was not related to the Voting Rights Act … in order to try to achieve a partisan advantage by federalizing election laws,” McConnell said, referencing the Freedom to Vote: John R. Lewis Act.

The part of the bill named after Lewis, the late civil rights leader and Democratic congressman from Georgia, would have updated the Voting Rights Act and was a direct response to a Supreme Court ruling that weakened the law’s oversight of states with a history of discriminating against Black and other minority voters.

Hudspeth Blackburn is a corps member for The Associated Press/Report for America Statehouse News Initiative. Report for America is a nonprofit national service program that places journalists in local newsrooms to report on undercovered issues.