The Long, Ongoing Debate Over ‘All Men Are Created Equal’ 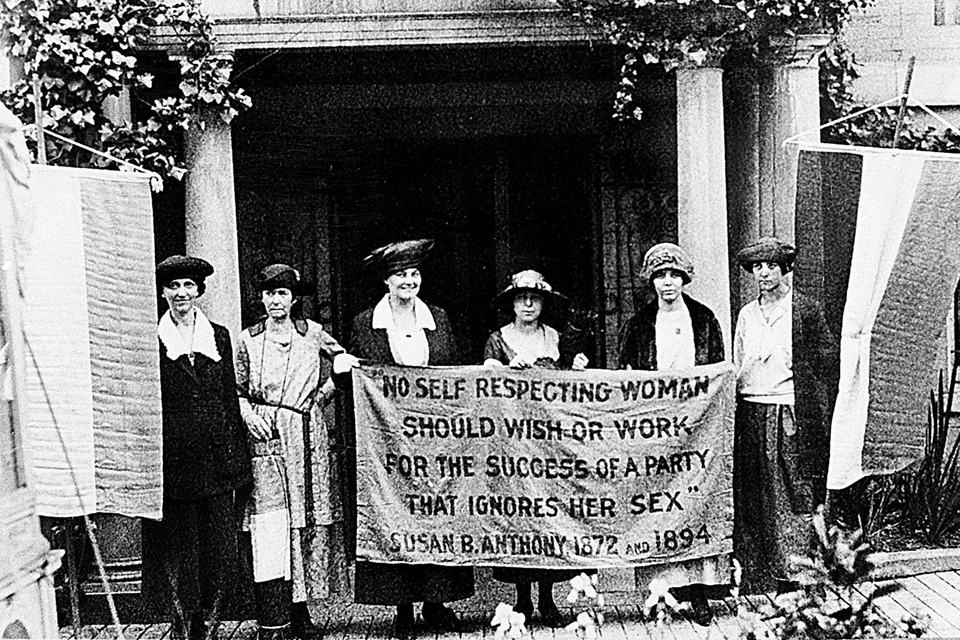 NEW YORK (AP) — Kevin Jennings is CEO of the Lambda Legal organization, a prominent advocate for LGBTQ rights. He sees his mission in part as fulfilling that hallowed American principle: “All men are created equal.”

“Those words say to me, ‘Do better, America.’ And what I mean by that is we have never been a country where people were truly equal,” Jennings says. “It's an aspiration to continue to work towards, and we're not there yet.”

Ryan T. Anderson is president of the conservative Ethics and Public Policy Center. He, too, believes that “all men are created equal.” For him, the words mean we all have “the same dignity, we all count equally, no one is disposable, no one a second-class citizen." At the same time, he says, not everyone has an equal right to marry — what he and other conservatives regard as the legal union of a man and woman.

"I don't think human equality requires redefining what marriage is," he says.

Few words in American history are invoked as often as those from the preamble to the Declaration of Independence, published nearly 250 years ago. And few are more difficult to define. The music, and the economy, of “all men are created equal” make it both universal and elusive, adaptable to viewpoints — social, racial, economic — otherwise with little or no common ground. How we use them often depends less on how we came into this world than on what kind world we want to live in.

It’s as if “All men are created equal” leads us to ask: “And then what?”

“We say ‘All men are created equal’ but does that mean we need to make everyone entirely equal at all times, or does it mean everyone gets a fair shot?” says Michael Waldman, president of the Brennan Center for Justice, which promotes expanded voting rights, public financing of political campaigns and other progressive causes. “Individualism is baked into that phrase, but also a broader, more egalitarian vision. There's a lot there.”

Justice for ... a selective group

Thomas Jefferson helped immortalize the expression, but he didn't invent it. The words in some form date back centuries before the Declaration and were even preceded in 1776 by Virginia's Declaration of Rights, which stated that “all men are by nature equally free and independent.” Peter Onuf, a professor emeritus at the University of Virginia whose books include “The Mind of Thomas Jefferson,” notes that Jefferson himself did not claim to have said something radically new and wrote in 1825 that the Declaration lacked “originality of principle or sentiment.”

The Declaration was an indictment of the British monarchy, but not a statement of justice for all. For the slave owning Jefferson “and most of his fellow patriots, enslaved people were property and therefore not included in these new polities, leaving their status unchanged,” Onuf says. He added that “did not mean he did not recognize his enslaved people to be people, just that they could only enjoy those universal, natural rights elsewhere, in a country of their own: emancipation and expatriation.” 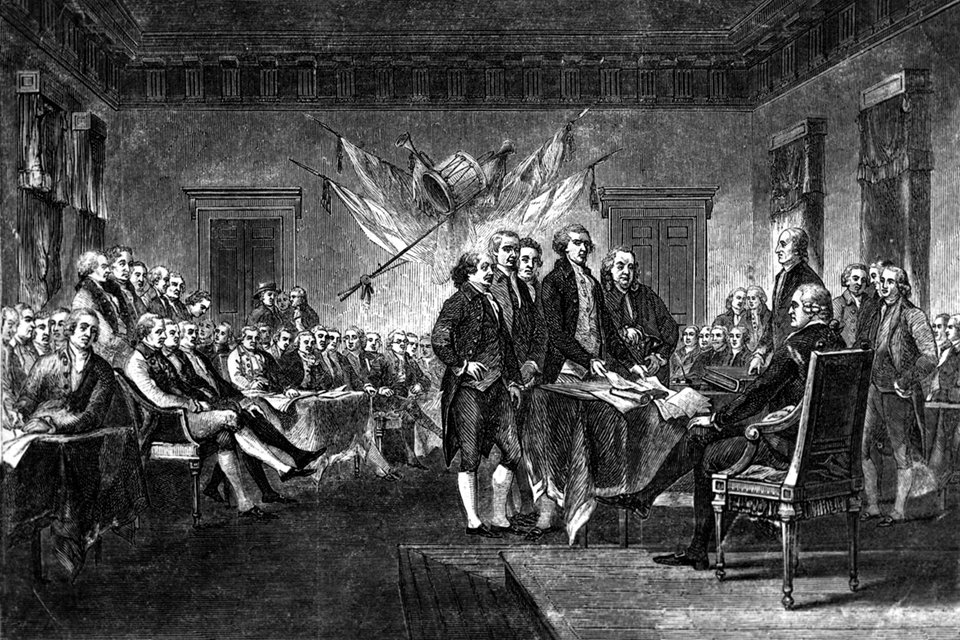 This undated engraving shows the scene on July 4, 1776 when the Declaration of Independence, drafted by Thomas Jefferson, Benjamin Franklin, John Adams, Philip Livingston and Roger Sherman, was approved by the Continental Congress in Philadelphia. The words "all men are created equal” are invoked often but are difficult to define. (AP Photo)

Hannah Spahn, a professor at the John F. Kennedy Institute in Berlin and author of the upcoming “Black Reason, White Feeling: The Jeffersonian Enlightenment in the African American Tradition,” says that a draft version of the Declaration made clear that Jefferson meant “all humans” were created equal but not necessarily that that all humans were equal under the law. Spahn, like such leading Revolutionary War scholars as Jack Rakove, believes that “all men are created equal” originally referred less to individual equality than to the rights of a people as a whole to self-government.

Once the Declaration had been issued, perceptions began to change. Black Americans were among the first to change them, notably the New England-based clergyman Lemuel Haynes. Soon after July 4, Haynes wrote “Liberty Further Extended: Or Free Thoughts on the Illegality of Slave-Keeping,” an essay not published until 1983 but seen as reflecting the feelings of many in the Black community, with its call to “affirm, that even an African, has Equally as good a right to his Liberty in common with Englishmen.”

Spahn finds Haynes’ response “philosophically innovative," because he isolated the passage containing the famous phrase from the rest of the Declaration and made it express “timeless, universally binding norms."

“He deliberately downplayed Jefferson’s original emphasis on problems of collective assent and consent,” she says.

The words have since been endlessly adapted and reinterpreted. By feminists at the Seneca Falls Convention of 1848 who stated “We hold these truths to be self-evident; that all men and women are created equal.” By civil rights leaders from Frederick Douglass to the Rev. Martin Luther King Jr., who in his “I Have a Dream” speech held up the phrase as a sacred promise to Black Americans. By Abraham Lincoln, who invoked them in the Gettysburg Address and elsewhere, but with a narrower scope than what King imagined a century later.

In Lincoln's time, according to historian Eric Foner, “they made a careful distinction between natural, civil, political and social rights. One could enjoy equality in one but not another.”

“Lincoln spoke of equality in natural rights — life, liberty and the pursuit of happiness,” says Foner, whose books include the Pulitzer Prize winning “The Fiery Trial: Abraham Lincoln and American Slavery.” “That’s why slavery is wrong and why people have an equal right to the fruits of their labor. Political rights were determined by the majority and could be limited by them."

The words have been denied entirely. John C. Calhoun, the South Carolina senator and vehement defender of slavery, found “not a word of truth” in them as he attacked the phrase during a speech in 1848. Vice President Alexander H. Stephens of the Confederate States contended in 1861 that “the great truth" is "the negro is not equal to the white man; that slavery subordination to the superior race is his natural and normal condition.”

Are we created equally?

The overturning of Roe v. Wade and other recent Supreme Court decisions has led some activists to wonder if “All men are created equal” still has any meaning. Robin Marty, author of “Handbook for a Post-Roe America,” calls the phrase a “bromide” for those “who ignore how unequal our lives truly are.”

Marty added that the upending of abortion rights has given the unborn “greater protection than most,” a contention echoed in part by Roe opponents who have said that “All men are created equal” includes the unborn.

Among contemporary politicians and other public figures, the words are applied to very different ends.

— President Donald Trump cited them in October 2020 (“The divine truth our Founders enshrined in the fabric of our Nation: that all people are created equal”) in a statement forbidding federal agencies from teaching “Critical Race Theory.” President Joe Biden echoed the language of Seneca Falls (“We hold these truths to be self-evident, that all men and women are created equal”) while praising labor unions last month as he addressed an AFL-CIO gathering in Philadelphia.

— Morse Tan, dean of Liberty University, the evangelical school co-founded by the Rev. Jerry Falwell Sr., says the words uphold a “classic, longstanding” Judeo-Christian notion: "The irreducible worth and value that all human beings have because they (are) created in the image of God.” Secular humanists note Jefferson's own religious skepticism and fit his words and worldview within 18th century Enlightenment thinking, emphasizing human reason over faith.

— Conservative organizations from the Claremont Institute to the Heritage Foundation regard “all men are created equal” as proof that affirmative action and other government programs addressing racism are unnecessary and contrary to the ideal of a “color-blind” system. 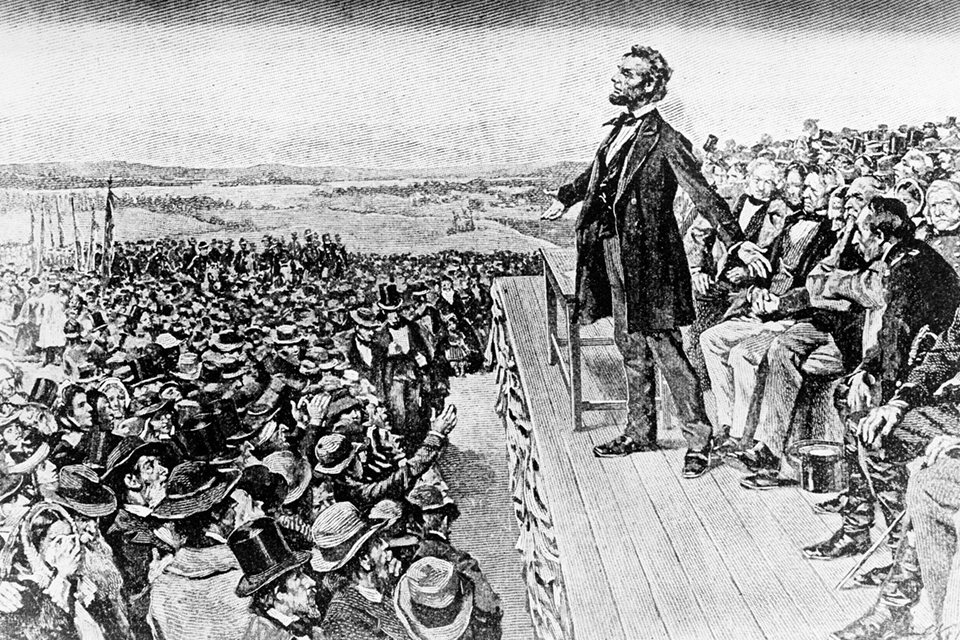 FILE - This undated illustration depicts President Abraham Lincoln making his Gettysburg Address at the dedication of the Gettysburg National Cemetery on the battlefield at Gettysburg, Pa., Nov. 19, 1863. (Library of Congress via AP, File)

Ibram X. Kendi, the award-winning author and director of the Center for Antiracist Research at Boston University, says the words can serve what he calls both “antiracist” and “assimilationist” perspectives.

“To be an anti-racist is to recognize that it’s not just that we are created equal, or biologically equal. It’s that all racial groups are equals. And if there are disparities between those equal racial groups, then it is the result of racist policy or structural racism and not the inferiority or superiority of a racial group.”