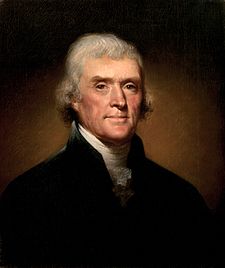 They are introducing measures that hinge on ``nullification,'' Thomas Jefferson's late 18th-century doctrine that purported to give states the ultimate say in constitutional matters.

GOP lawmakers introduced such a measure Wednesday in the Idaho House, and Alabama, Kansas, Maine, Missouri, Montana, Oregon, Nebraska, Texas and Wyoming are also talking about the idea.

The efforts are completely unconstitutional in the eyes of most legal scholars because the U.S. Constitution deems federal laws ``the supreme law of the land.'' The Idaho attorney general has weighed in as well, branding nullification unconstitutional.

``There is no right to pick and choose which federal laws a state will follow,'' wrote Assistant Chief Deputy Attorney General Brian Kane.

Regardless of the very dubious constitutional nature of the efforts, the nullification push has become a rallying cry in conservative states at a time when anti-government angst is running high and ``state's rights'' are a popular belief among the tea party crowd.

Delegates at Idaho's Republican convention last year urged seizure of federal lands and resurrection of the gold standard. Conservatives in Montana lined up the out the door of a legislative committee room last week to speak in favor of a bill that would make sheriffs the supreme local authorities, another measure widely believed to be unconstitutional.

In Alabama, a version of nullification sponsored last year by Republican Sen. Scott Beason passed the Senate, but died in a Democrat-led House committee. He'll resurrect it this year.

``A lot people say, if the Supreme Court decides that it is constitutional, you have to live with it. My feeling is, the people should have the final say,'' Beason told The Associated Press on Tuesday. ``Frankly, the only recourse people have is for the states to try to flex some sovereignty muscle.''

Idaho is already one of 27 states suing over health care reform and its provision to eventually require people to buy insurance, but Gov. C.L. ``Butch'' Otter hinted in a Jan. 10 speech he may go further by pursuing nullification.

For philosophical guidance, many proponents look to Jefferson's words 211 years ago in which he fought against the expansion of federal power during an undeclared naval war against France.

In 1799, Jefferson wrote in the Kentucky Resolutions that ``nullification ... is the rightful remedy.'' Jefferson created the doctrine to express his disgust with the Alien and Sedition Acts that were enacted by then-President John Adams during the war with France.

``He was at the Constitutional Convention,'' Pearce said. ``He understood how this whole thing was going to be set up.''

Actually, Jefferson was far away, in France, as the framers met in 1787 in Philadelphia to replace the Articles of Confederation.

And his beliefs on nullification were nothing more than his opinions -- there's no such mention in the Constitution, said David Gray Adler, a constitutional scholar who directs the University of Idaho's McClure Center for Public Policy Research.

``There's nothing in the Constitution to suggest that the states are superior to the federal government,'' Adler said. ``We have a long string of Supreme Court decisions that reject their theory.''

Nullification has been invoked several times over the years -- to no avail.

South Carolina wielded it in the 1830s to fight federal tariffs -- and nearly provoked armed conflict. Historians see that state's ``Nullification Crisis'' in 1832 as a prelude to the Civil War.

In the 1950s, Arkansas defied the federal government on desegregation, prompting a 9-0 Supreme Court ruling that states were bound by federal law. Abolitionist Wisconsin's efforts to nullify the 1850 Fugitive Slave Act also were shot down.

And in a landmark 1819 case in Maryland, the Supreme Court underscored that states are subordinate to federal action.

At the Idaho Legislature, however, GOP lawmakers brandish a 306-page book by Kansas-based author Thomas Woods Jr., promoting nullification that tells them otherwise.

As a college student in 1994, Woods helped found the League of the South, an Alabama group the Southern Poverty Law Center says has become a ``neo-Confederate group'' seeking a second Southern secession. Woods told the AP last week he thinks states have a right of secession, but he doesn't support the Confederacy's return. He's no longer a member.

He argues in ``Nullification: How to Resist Federal Tyranny in the 21st Century'' that Jefferson was right: States created the federal government, and remain the final check-and-balance should the president, Congress and Supreme Court all get it wrong.

``I don't believe the Supreme Court or any body of fallible men are demigods,'' Woods said.

Idaho Rep. Vito Barbieri, R-Coeur d'Alene, is a sponsor of the measure introduced in the House State Affairs Committee on Wednesday. He doesn't share the view of constitutional scholars that ``nullification'' is a non-starter.

``If we decide it is settled law -- that the federal government can do anything it wants against state priorities -- we might as well just get rubber stamps,'' he said.