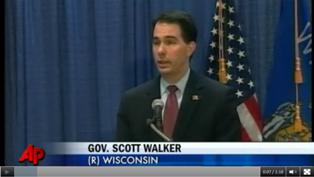 MADISON, Wis. (AP) -- Dozens of protesters camped outside the Wisconsin state Assembly chamber on Thursday in anticipation of a final vote on explosive anti-union rights legislation that whisked through the Senate after Republicans outmaneuvered their missing Democratic counterparts and brought a three-week stalemate to its unexpected end.

The dramatic turn of events late Wednesday set up Thursday's perfunctory vote on the legislation that would strip collective bargaining rights from most public workers. Once the measure passes the Assembly, it heads to Republican Gov. Scott Walker for his signature.

Within hours of the Senate passing the plan, a crowd of hundreds of protesters grew to about 7,000 in the Capitol, a crowd as large as any seen inside the building in three weeks of demonstrations.

"The whole world is watching!" protesters shouted as they pressed up against the heavily guarded entrance to the Senate chamber. Most protesters left by midnight - many were expected back Thursday for a rally preceding the Assembly vote - but dozens of others spent the night in the Capitol corridors, some sleeping on the marble floor with no padding. State officials said no attempts would be made to force them to leave.

The legislation, which rocked the state and unions nationwide, had been stymied after all 14 Senate Democrats fled to Illinois three weeks ago, preventing the chamber from having enough members present to pass it. Walker introduced it to plug a $137 million budget shortfall.

The Senate requires a quorum of 20 to take up any measures that spend money. But a special committee of lawmakers from the Senate and Assembly voted late Wednesday afternoon to take all the spending measures out of the legislation and the Senate approved it minutes later, 18-1.

"I voted my conscience which I feel reflects the core beliefs of the majority of voters who sent me here to represent them," Schultz said in a statement.

The unexpected yet surprisingly simple procedural move ended the stalemate that had threatened to drag on indefinitely. Until Wednesday's stunning vote, it appeared the standoff would persist until Democrats returned to Madison from their self-imposed exile. But in a matter of minutes, it was over.

"In 30 minutes, 18 state senators undid 50 years of civil rights in Wisconsin. Their disrespect for the people of Wisconsin and their rights is an outrage that will never be forgotten," said Democratic Senate Minority Leader Mark Miller. "Tonight, 18 Senate Republicans conspired to take government away from the people."

In an interview with The Associated Press, Miller said there is nothing Democrats can do now to stop the bill: "It's a done deal."

"We didn't believe that the Republican senators would stay with the governor and rubber-stamp his plan," Hansen told CBS' "Early Show" on Thursday.

The Democrats may put renewed energy into efforts under way to recall eight of the Republican state senators. Six Democratic senators are also the target of recall efforts.

Senate Democrats met late Wednesday night to discuss when they might return. They said they would not be back on Thursday, but gave no indication when they might come home.

"We are going to watch and see how the Assembly unfolds," said Sen. Spencer Coggs. "There will be fireworks. There will be a lot of people at the Capitol and so it will be hard to get in and out of the Capitol."

Walker had repeatedly argued that collective bargaining is a budget issue, because his proposed changes would give local governments the flexibility to confront the budget cuts needed to close the state's $3.6 billion deficit. He has said that without the changes, he may have needed to lay off 1,500 state workers and make other cuts to balance the budget.

Walker said Wednesday night that Democrats had three weeks to debate the bill and were offered repeated opportunities to come back, but refused.

"I applaud the Legislature's action today to stand up to the status quo and take a step in the right direction to balance the budget and reform government," Walker said in the statement.

The measure forbids most government workers from collectively bargaining for wage increases beyond the rate of inflation unless approved by referendum. It also requires public workers to pay more toward their pensions and double their health insurance contribution, a combination equivalent to an 8 percent pay cut for the average worker.

Police and firefighters are exempt.

Walker's proposal touched off a national debate over union rights for public employees and prompted tens of thousands of demonstrators to converge on Wisconsin's capital city for weeks of protests.

Wednesday's drama unfolded less than four hours after Walker met with GOP senators in a closed-door meeting. He emerged from the meeting saying senators were "firm" in their support of the bill.

For weeks, Democrats had offered concessions on issues other than the bargaining rights and they spent much of Wednesday again calling on Walker and Republicans to compromise.

Senate Majority Leader Scott Fitzgerald said earlier that Republicans had been discussing concessions offered by Walker, including allowing public workers to bargain over their salaries without a wage limit. Several GOP senators facing recall efforts had also publicly called for a compromise.

"The people of Wisconsin elected us to come to Madison and do a job," Fitzgerald said in a statement after the vote. "Just because the Senate Democrats won't do theirs, doesn't mean we won't do ours."

Assembly Minority Leader Peter Barca, the lone Democrat present on the special committee that put the bill in position to pass the Senate, shouted that the meeting was a violation of the state's open meetings law.

"The jig is now up," Barca said. "The fraud on the people of Wisconsin is now clear."

The Senate's chief clerk said hours later the meeting was properly held. Fitzgerald said he cleared the Senate's action with the Legislature's attorneys, the nonpartisan Fiscal Bureau and bill drafters.

Union leaders weren't happy with Walker's previous offer of concessions, and were furious at the Senate's move to push the measure forward with a quick vote. Phil Neuenfeldt, president of the Wisconsin state AFL-CIO, said after Wednesday's vote that Republicans exercised a "nuclear option."

"Scott Walker and the Republicans' ideological war on the middle class and working families is now indisputable," Neuenfeldt said.

Associated Press writers Todd Richmond and Jason Smathers in Madison, and Robert Ray in Grayslake, Ill., contributed to this report.