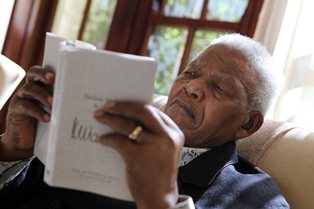 JOHANNESBURG (CNN) -- Former South African President Nelson Mandela is "responding positively" to treatment after he was readmitted to a hospital overnight for a recurring lung infection.

"He remains under treatment and observation in hospital," Zuma said Thursday.

Mandela was conscious when he was taken to the hospital just before midnight Wednesday, Zuma's office said.

It's the second time this month he has been hospitalized. More than two weeks ago, he was taken to a hospital for what officials described as a routine checkup.

Mandela has become increasingly frail over the years, and has not appeared in public since South Africa hosted the World Cup in 2010.

"Doctors are attending to him, ensuring that he has the best possible expert medical treatment and comfort," Zuma's office said in an earlier statement Thursday.

"We appeal to the people of South Africa and the world to pray for our beloved Madiba and his family, and to keep them in their thoughts."

"Madiba" is Mandela's clan name, which is widely used in the nation.

Zuma's office did not say to which hospital he was admitted, but renewed calls for his privacy.

Mandela has been treated for the ailment before. He underwent treatment for a lung infection and had surgery to remove gallstones over the Christmas holiday in 2012; one of his longest hospital stays since his release from prison in 1990.

Considered the founding father of South Africa's democracy, Mandela became an international figure when he endured 27 years in prison for fighting apartheid, the country's system of racial segregation.

Mandela was elected president a year later, serving only one term, as he had promised.

Despite only rare public appearances in recent years, he retains his popularity and is considered a hero of democracy in the nation. Last year, South Africa launched a new batch of banknotes with a picture of a smiling Mandela on the front, a testament to his iconic status.

Mandela's impact extends far beyond South African borders. After he left office, he was involved in mediating conflicts from Africa to the Middle East.