After 37 Years, Rule of Zimbabwe's Mugabe Appears to be Over 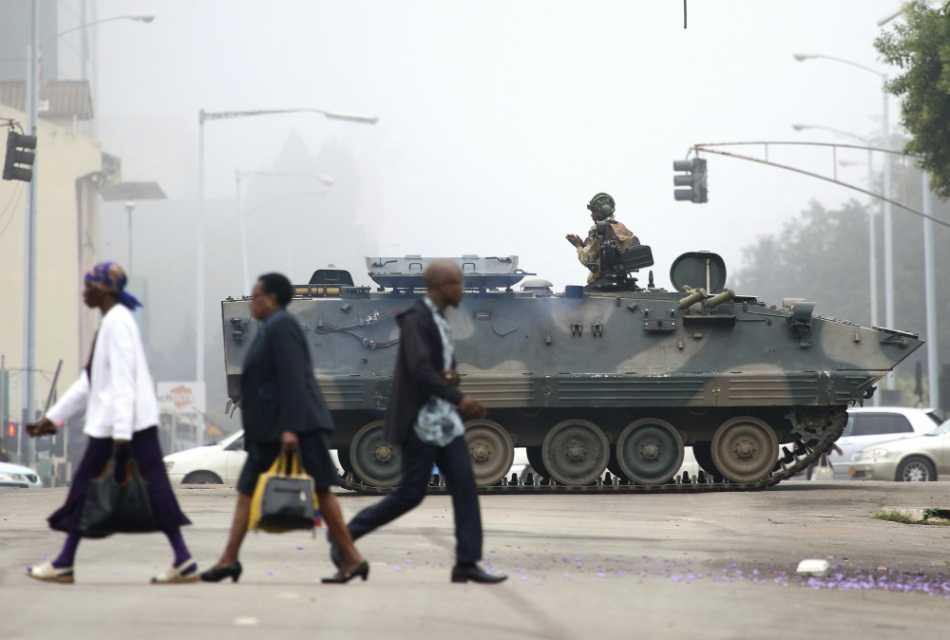 HARARE, Zimbabwe (AP) — Zimbabwe's military was in control of the capital and the state broadcaster on Wednesday and was holding President Robert Mugabe and his wife under house arrest in what appeared to be a coup against the 93-year-old Mugabe, the world's oldest head of state.

The military was at pains, however, to emphasize it had not staged a military takeover, but was instead starting a process to restore Zimbabwe's democracy.

Still, the military appeared to have brought an end to Mugabe's long, 37-year reign in what the army's supporters praised as a "bloodless correction." South Africa and other neighboring countries were sending in leaders to negotiate with Mugabe and the generals to encourage the transition.

Citizens in Zimbabwe's tidy capital, Harare, contributed to the feeling of a smooth transition by carrying on with their daily lives, walking past the army's armored personnel carriers to go to work and to shops. Many who have never known any leader but Mugabe waited in long lines at banks to draw limited amounts of cash, a result of this once-prosperous country's plummeting economy.

Felix Tsanganyiso, who sells mobile airtime vouchers in Harare, said he was following the developments on WhatsApp.

"But I am still in the dark about what is happening," he said. "So far so good. We are going about our business without harassment. My plea is that whoever takes over should sort out the economy. We are tired of living like this."

The series of whiplash events followed Mugabe's firing last week of his deputy, which appeared to position the first lady, Grace Mugabe, to replace Emmerson Mnangagwa as one of the country's two vice presidents at a party conference next month.

But the 52-year-old first lady is unpopular among many Zimbabweans for her lavish spending on mansions, cars and jewels. Last month she went to court to sue a diamond dealer for not supplying her with a 100-carat diamond that she said she had paid for.

Grace Mugabe has been known as the leader of the G40, a group of Cabinet ministers and officials in their 40s and 50s who are too young to have fought in Zimbabwe's war to end white-minority rule in Rhodesia. When Mnangagwa was fired, the generals and war veterans felt they were being sidelined and took action to stop that, analysts say.

Mnangagwa's whereabouts were not clear Wednesday. He fled the country last week, citing threats to him and his family.

On Monday, the army commander made an unprecedented statement criticizing Mugabe for pushing aside veterans of the liberation war. The following day, the ruling party condemned the army leader for "treasonable conduct" and that evening the army sent armored personnel carriers into Harare and seized control of the state broadcaster and other strategic points, including Mugabe's residence.

In a televised address to the nation early Wednesday, Maj. Gen. Sibusiso Moyo said the army had "guaranteed" the safety of Mugabe and his wife, but added the military would target "criminals" around Mugabe, in an apparent reference to the first lady's G40 group.

South African President Jacob Zuma said he was sending his ministers of defense and state security to Zimbabwe to meet with Mugabe and the military there. He said he hopes Zimbabwe's army will respect the constitution and that the situation "is going to be controlled."

Who will rule Zimbabwe should become clearer in the coming days.

"The whole idea is that the military has always been the chief broker in Mugabe's ruling party," he said. "But there were attempts to sideline the military by G40 and (the military) are reasserting their position."

Mnangagwa may well be installed as a transitional leader to return Zimbabwe to constitutional rule, Rusero said.

Zimbabwe may enter a period of negotiation to get Mugabe to step down voluntarily, said Piers Pigou, southern Africa consultant for the International Crisis Group, who also suggested that Mnangagwa may be an interim leader.

"Zimbabwe could have some kind of inclusive government and some kind of democratic process, possibly leading to elections," Pigou said. "It's clearly a coup d'etat, but typical of Zimbabwe, the military is trying to put a veneer of legality on the process. ... It is part of the theater that Zimbabwe is so good at, to try to make things look orderly and democratic. South Africa and other neighboring countries may be brought in to help put some lipstick on the pig."