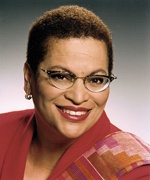 The unemployment rate has hovered above 8 percent for several months, most recently holding ground at 8.2 percent, the same as last month.  Meanwhile, the African American unemployment rate went up, officially to 14.4 percent, and we all know that means the real rate is even higher, probably in excess of 25 percent.

Republican presidential candidate Mitt Romney interrupted his vacation to gloat about the number of Americans who are experiencing misery, and his gloating might be at least somewhat amusing were this not the same man who says he likes to fire people.

The 8.2 percent unemployment is not in President Obama's best interest.  Many who are feeling the misery and pain are open to an alternative, even if it is one as muddled and confused as Romney who doesn't support health care reform now, although he engineered a similar  plan as governor of Massachusetts.  This man has so talked out of his mouth, that a simple reel of his contradictory quotes would make it clear how confused, or deliberately deceiving he is.

The good news for President Obama is that the lower the unemployment rate goes, the better his chances for re-election.  The better news for President Obama is that many people don't snap into campaign mode until after Labor Day.  People want jobs, to be sure, but the summer numbers even if they are level, don't alarm everyone.  The employment reports that our president has to pay the most attention to are those released  the first Friday of September and October.  This is when Republicans will get all cranked up and suggest that President Obama can't handle the fractured economy he inherited.

Can the unemployment rate drop?  Well if Republicans would pass the American Jobs Act, an actual plan for employment, it might.  It is in the interest of the nation's unemployed, but not in the interest of Republican chicanery, for the American Jobs Act to be enacted.  In some ways, Republicans are starving their constituents to thwart President Obama.  Similarly, when state and local governments have to lay people off because their budgets are tight, the federal government has previously stepped in to help.  Part of the recovery funds went to state and local governments, some who turned the money down in the interest of fiscal conservatism.  There the Republicans go again, hurting their constituents to thwart President Obama.

Part of the reason Republicans can get away with this is because no one is pressuring them.  Just like the Tea Party has pushed these people to the right, somebody needs to push them back to center.  The Tea Party has virtually obliterated the notion of a moderate Republican, but there must be some out there, and what has to happen is that somebody needs to push back.

Meanwhile, Republicans fiddle while Rome burns because no one has called them on it.  Whenever Romney says the president has no plan, somebody needs to remind him of the American Jobs Act.  Whenever  Romney starts babbling about health care, someone ought to throw Massachusetts in his face. And when the braying bunch of bobbleheads who call themselves the Tea Party get worked up over the economy, we need to ask them: How many people in your family are unemployed? How much Social Security does your mama have? Don't your kids have student loans? Does everyone in your family have health care?

Fuelled by race matters and rhetoric, working class White people are organized for Romney, someone who would cut education, health care, and Social Security and put those "savings" into military spending and tax cuts for the wealthy.  In other words, and not for the first time, working class White people are working against their own economic interests.

Meanwhile, if House Republicans want to move an economic agenda that helps some 14 million unemployed people, perhaps they can see their way clear to pass the American Jobs Act.  We don't need all the Republicans, maybe just a third of them, and I'll wager that perhaps that many have sense enough to see what their leader, John Boehner (R-Ohio], does not.  In any case, let's make it plain.  The unemployment rate is stagnant because Republicans have failed to act.