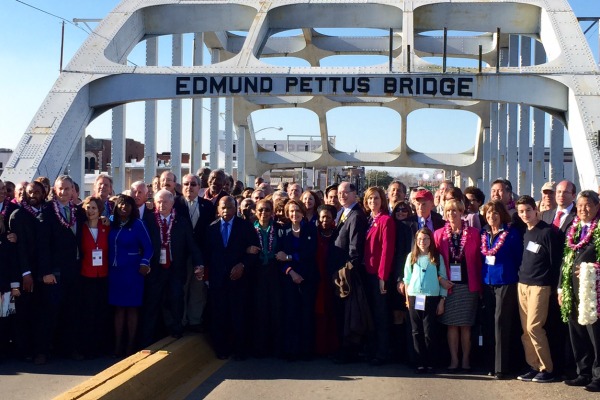 “Hate is too big a burden to bear,” Dr. Martin Luther King Jr. once said. That was the message Congressman John Lewis gave to a delegation of almost 100 fellow members of Congress that traveled with him to Selma on the 50th anniversary of Bloody Sunday. What an honor it was to join that trip as a representative of the people of Oregon.

Our first stop was Birmingham. At the Civil Rights Institute, we saw exhibits that depicted the ugly history of the South with graphic photos and recordings of voices spewing hatred and bigotry. These exhibits illustrated why John Lewis, Dr. Martin Luther King Jr., and so many others were driven to work for the cause of justice.

In the 16th St. Baptist Church, images of Addie Mae Collins, Cynthia Wesley, Carole Robertson, and Carol Denise McNair were projected on the walls alongside stained glass windows. These innocent young girls - killed by the malicious bombing in 1963 – smiled down on us as we looked over at the staircase where the bomb exploded.

At the church John Lewis told us that, years after being beaten and imprisoned, one of the men who beat him came to visit at the nation’s Capitol. The man confessed to Congressman Lewis and asked for forgiveness. “Yes,” John Lewis told him, “I forgive you.” Indeed, hate is too big a burden to bear.

Early Saturday morning we drove to Selma. Traffic was thick as thousands of people flocked to the city. At Brown Chapel, where activists had organized and learned lessons of nonviolence, we heard speakers tell poignant stories from the civil rights movement.

I was moved by the words of Mary Liuzzo Lilleboe, daughter of civil rights activist Viola Liuzzo. Mary talked about how her mother, a white homemaker from Detroit, went to Selma to march after Bloody Sunday shocked the nation.

Viola left her five children and went to Alabama, where she drove people home after the march. On a back road between Selma and Montgomery, Viola was shot and killed by the KKK. Mary said people ask why her mother risked so much for civil rights. “The question,” she said, “shouldn’t be why my mother went; it should be why didn’t more people go?”

At the foot of the Edmund Pettus Bridge, the sun beat down on the crowd of thousands as we waited for President Obama. This speech was one of the best he has ever delivered. He defined Selma as one of the places where our nation’s destiny was determined. He recognized and celebrated the heroes of the civil rights movement. And he reminded us that progress was made in and because of Selma, but our work is not done.

On Sunday we gathered in front of the Capitol in Montgomery. Full of emotion, Peggy Wallace Kennedy, Governor Wallace’s daughter, spoke about creating a new legacy for her family – a legacy of compassion and equality rather than the hate for which her father is remembered.

She gave her speech on the same grounds where her father infamously declared, “segregation now, segregation tomorrow, segregation forever.” She closed by saying "I want to do something my father never did and recognize John Lewis for his humanity, his dignity and for being a child of God." Her words brought us to our feet and to tears.

From back home in Oregon, where our state is a leader in breaking down barriers to exercising the right to vote, I say to Congressman Lewis, thank you for inspiring us, and for sharing your history, your humanity, your conscience, and your lessons of compassion. Our nation has come so far in the past 50 years, but the vision of our civil rights leaders is not yet fulfilled.