Jailing Educators for ‘Cheating to the Test’ 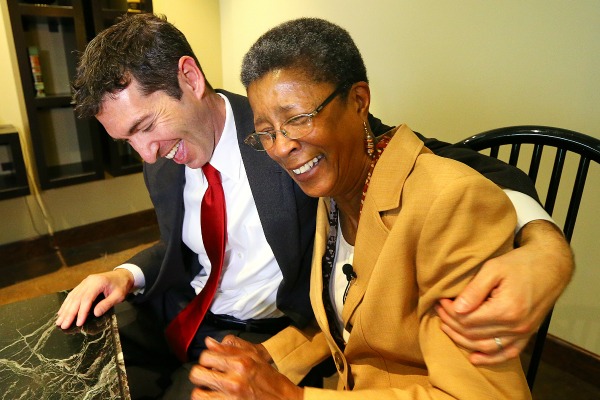 Eleven Atlanta teachers have been convicted of altering student test scores on standardized tests. They are charged with racketeering and conspiracy. The much-celebrated Superintendent of Atlanta Public Schools Beverly L. Hall was among the indicted but was too ill to stand trial. She died March 2.

Another group of teachers, principals and administrators took plea bargains. A total of 178 people were accused of taking part in the cheating “scam” and in 2011 Hall reminded observers that “we have over 3,000 teachers in Atlanta,” and just a few were part of the cheating scandal. She also denied having any knowledge of the cheating. Until her illness, she insisted that she wanted to stand trial and clear her name.

In what was described as the largest cheating scandal in the nation’s history, District Attorney Paul L. Howard Jr. prosecuted the educators under a law originally designed to snare organized crime figures. Of the 12 defendants, 11 were convicted of racketeering, a felony punishable up to 20 years. One defendant, Dessa Curb, a former elementary school teacher, was acquitted.

Those 11 convicted were taken straight from the courtroom to jail. Sentencing should take place this week. On top of the 20 years maximum sentence for racketeering, they could be convicted on other charges including making false statements. It is interesting to note that most of these teachers are African American.

You can serve as few as 15 years for second-degree murder in Georgia, and as little as a year for involuntary manslaughter. Further, most convicted offenders get a day or even months to go home and straighten out their affairs before reporting to prison. But not this group of educators.

These Atlanta teachers aren’t the only teachers involved in similar cheating scams. A year ago, 130 Philadelphia educators were accused of cheating. In September, several were ordered to stand trial.

There is no excuse for the cheating in Atlanta, or Philadelphia, or in El Paso, where the school superintendent was imprisoned for reporting faulty test scores.

While there is no excuse, it would be foolhardy to ignore the pressure that many face when federal laws mandate the use of standardized tests to “prove” that teachers and schools are doing their jobs.

In some districts, including Atlanta, teachers are given bonuses when their students do well on tests, and may be terminated when students do not. Even now, after revisions in teacher evaluation, half of teacher performance is based on standardized tests. Teachers can be reassigned, or schools can be closed if there are too many poor-performing students enrolled.

It makes sense to look at the many ways that the system encourages teachers to manipulate, if not outright cheat, when they administer standardized tests. Some schools spend days preparing students to take the tests.

They aren’t spending days teaching the material students must learn, just the rote material needed to pass standardized tests. Passing a test in English and grammar may prove some proficiency, but does it prove that a student can write a paragraph or an essay, or engage in critical thinking?

I’m referring to teachers who choose to teach content that they know will show up on the test, or those who spend tens of hours in “practice sessions” with old copies of tests used as drills. From my perspective students are being cheated when there is too much emphasis placed on standardized testing.

One might ask how teachers and students can be evaluated without standardized tests, but there is an extensive body of research that suggests other methods of evaluating teachers, including classroom observation and curriculum review. Interestingly, an increasing number of colleges do not use standardized tests to evaluate students for admissions because they recognize such tests are flawed.

It makes sense, though, to ask if there is a racial dynamic to leading nearly a dozen teachers, mostly African American, out of a courtroom in handcuffs. And it makes sense to wonder if the charge of racketeering is being applied to harshly for what is clearly illegal misconduct.

While teaching to the test is not against the law, isn’t it cheating our students nearly as much as the scams?

Julianne Malveaux is an economist, writer, and President Emerita of Bennett College. She can be reached at juliannemalveaux.com.