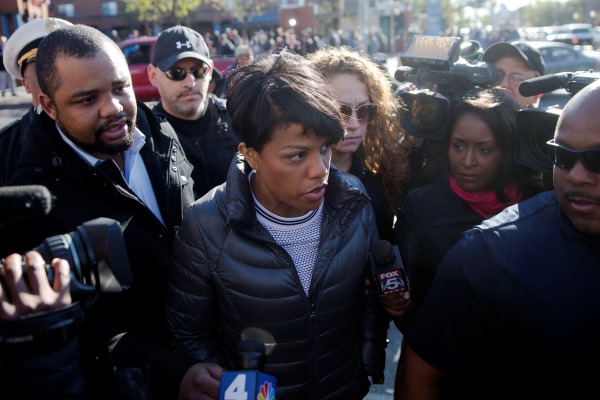 Freddie Gray, 25, was racially profiled and then chased down by the Baltimore police officers. He subsequently died as result of police action taken after what the mayor called an unjust arrest.  But the Gray tragedy is not an isolated case.  It is symptomatic of a criminal justice system gone mad with racism and bigotry.

This deadly scenario of racial profiling and the use of fatal police force against Black Americans continue to increase across America with blatant disregard for precious value of life.  Yes, Black Lives Matter all the time everywhere.

Congressman John Conyers (D-Mich.) and Senator Ben Cardin (D-Md.) have once again introduced a bill designed to make racial profiling a federal criminal offense. It’s called The End Racial Profiling Act of 2015 (H.R. 1933).  If police officers knew that they could face federal imprisonment for committing acts of racial profiling, this law would have a definite impact toward reducing these racist practices.

The growing public demonstrations in Baltimore and across the nation are indications that something substantive needs to change.  Even with the calls for better police training and the proposed transition to more community based policing will not work effectively as long as racial profiling by police officers is openly permitted without punitive consequences.

Conyers stated, “This is a systemic issue plaguing men of color in America, stigmatizing them from youth throughout adulthood. The bill introduced by Sen. Cardin and I would make for the first time, use of racial profiling a federal offense.  By ending use of racial profiling in police tactics and prioritizing community relations, we can cultivate community focused; smart policing that rebuilds trust in law enforcement.”

Of course with a Republican-led Congress, it will take significant bipartisan support to get the Conyers’ bill passed.

Senator Cardin represents the state of Maryland and this is the state that the whole world is now watching and waiting to see what will be the outcome in Baltimore of the Freddie Gray case. Cardin emphasized, “Tragic events in Baltimore and New York, North Charleston and Ferguson, and elsewhere around the country have shown us that federal legislation finally ending racial profiling is essential.”

It has been 50 years since the infamous Watts riots in Los Angeles that were also triggered in part by racial profiling and hideous acts of police brutality.  So have we learned anything about this issue in the past 50 years?  The direct answer is that our society is still in a state of denial of its racial problems that are deep seated and rooted in the systems of racial injustice, poverty and economic inequality.

The current attempts to divert attention away from the unjust racial profiling actions and deadly brutality of the police in Baltimore against Freddie Gray to speculation about whether Gray  broke his own spine and crushed voice box in a so-called self-inflected rage is a classic example of how the police always criminalizes their victims. Police officers guilty of brutality always in the aftermath attempt to demean the character of those they have brutalized. Keep in mind Gray was deemed suspicious at first by the police only because of how he looked. In other words, the fact that Gray was racially profiled ultimately led to his death at the hands of police.

We must, therefore keep marching and keep demanding equal justice. We must continue without apology to shout as loud as we can that “Black Lives Matter.”  The case of Freddie Gray as well as all the other recent cases of racially-motivated police brutality must remain in our collective national consciousness and activism until justice is done.

We should definitely express our support the Conyers-Cardin bill. Racial profiling should not be tolerated and must be made a crime by law. Changing laws and enacting The End Racial Profiling Act, however, are the right steps to be taken, but that will not be the complete journey towards equal justice and fairness.  All forms of racial injustice must continue to be challenged.  The ultimate goal is to have a non-racial society and an inclusive democracy where race or ethnicity will not be a discriminating factor.  We still have long ways to go.

Benjamin F. Chavis, Jr. is the President and CEO of the National Newspaper Publishers Association (NNPA).