My White Male Privilege Is Complicit In Black Male Killings 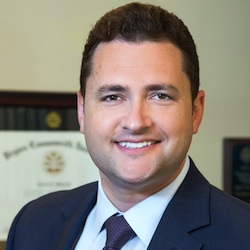 I am the outward embodiment of privilege. A 39 year old heterosexual white man. A six foot tall lawyer with no physical impairments living on a safe street with my white lawyer wife and our two kids in a safe part of an overwhelmingly white city and state...and this letter is about shame.

Shame that so many lives in my community and this country have been quietly lived and loudly taken in such demonstrably unjust ways. Shame that our collective inaction, and our cumulative public policies have led us to a place where death from guns, and death from the police, have become so brazen and so common, that even now, despite the advantage and widespread use of recording devices, my own inaction is complicit.

When I was 16 years old I was pulled over for the first time in my life. I was speeding in northern Virginia. The police officer was standing on the side of the road with a radar gun pointed at my car and he was shouting and motioning at me to pull over to the side of the road. The officer approached me quickly and said I was driving 12 miles an hour over the limit. He angrily told me that I was a new driver and therefore needed to drive more slowly.

When he walked back to his motorcycle to issue me my ticket, I yelled out my window at him:

“Officer, can’t you just give me a warning this time?”

It is a shame. It is a shame that at 16 years of age I was already well aware of my white male privilege – or at least not afraid to throw the police such an arrogant question which is a byproduct of the same thing - I was just a naïve teenager, but I didn’t have an inkling of concern that I might increase my chances of being targeted for later harassment, or told to “step out of the car”, or told to “watch myself” or told to “calm down” or ultimately become the victim in a reflexive escalation that might lead to my own death over a speeding ticket.

How many black or brown or yellow or red or mentally ill or LGBT or female teenagers would have yelled out the window of their formerly speeding vehicle at 16 years of age to ask… challenge…a white male officer after they had been so plainly at fault? For how many would that request have been granted?

It was granted for me. The officer was visibly upset and shouted that he had just ticketed a woman who was driving slower than I was, but a lecture was all he gave me before he waved me forward and I drove away.

I am a plaintiffs’ civil rights attorney now. All around me I see different sides of injustice, but I am not forced to personally live it the same way my clients do.

It is true that some of the black men who have been shot by police had criminal records. But that should not diminish the value of their lives or the tragic manner of their deaths in any way, yet I have condoned that devaluing with my silence. I have allowed the absurdity of the indefensible to take root, and I have turned a blind eye to alleged “actionable offenses” given in the name of police officers who if not legally - were physically responsible for any number of far too many untimely black deaths.

Death for “offenses” like speeding…or selling CDs…or loitering…or looking too poor…or looking too rich…or running away…or standing one’s ground….or being a 12 year old boy playing with a toy gun despite growing up in an American culture that so vociferously promotes one’s right - indeed obligation - to possess all manner of real guns (as long as the possessor is white) …or asking “what’s the charge?”…or saying “I want a lawyer” or asserting any number of constitutionally guaranteed rights ... or pleading with closed eyes, “Officer, can’t you just give me a warning this time?” ...or crying, and then whispering while they died, “I can’t breathe."

I am ashamed that white America has not demanded a systemic realignment about who we hire as police officers, how we train them, what we expect from them, what crimes we enforce and for what actions we hold the public as well as police accountable.

Police officers have an incredibly difficult job, but we must redefine the rules of engagement to remind everyone, especially the police, that they are not an occupying force, and people of color are not an insurgency.

The disproportionate rates at which these deaths occur, overwhelmingly to black men often after having committed only minor offenses, let alone no offense at all, is too staggering a number to continue to ignore with condoned white silence. Including my own.

My shame is that I am only now speaking out about this. My shame is that the kids of color I went to high school with, friends and students of color I studied with in college, peers and their families I work with who are people of color, have and know that they have...a far greater chance of being killed by their own tax funded governmental agencies – the police - than I or my family ever has or ever will.

These are men, women and children who live in a constant state of worry and fear of an unjust truth; that driving or walking down the street if you are not straight, male and white is far more dangerous than if you are.

So my pledge to every elected official at the local, state, and federal level is this: in my small corner of the world, with what voice I have and with what resources I can bring to bear, I will no longer support any elected official, public policy, agency or private entity who does not immediately and forcefully move to address, call out, and end this national disgrace with clear, swift and cogent forward steps. I will be silent no more.

And to every police officer or silently complicit member of the long blue line who more often than not does the right thing, but still turns a blind eye towards the level of racially disproportionate killings and injustices among your ranks and within our cities…know that my eyes have been opened…and know that I am not alone.
###
-Rob Milesnick is an American Attorney who practices Employment and Civil Rights law in Oregon and Washington State, and is a former adjunct professor of Criminology and Criminal Justice at Portland State University. He lives in Portland, Oregon with his wife and two kids.-
--
Robert S. Milesnick, Attorney at Law Oregon | Washington www.milesnicklaw.com