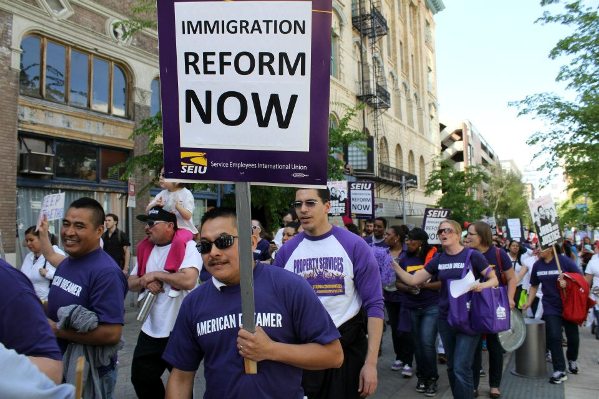 Now is the time Mr. President. It's been six years since you promised to act to prevent the US immigration enforcement from breaking up families.

Simply by using the power of the presidential executive order, you could prevent millions of deportations that hurt families, hurt our economy and destroy lives. Many people have been waiting for 10 years or more. Under the current system there is no avenue for most of these people to legalize their status.

Immigration reform is not a bone to throw at America’s newcomer communities. It is a necessity. Extending work visas to highly skilled and educated people is one no brainer. Finding a way for the Dreamer generation to contribute to our society is another. And when the children of immigrants are citizens, we should find a way for their parents to become citizens too. Breaking up families is not in the best interests of a civil society.

These are the people who will be caring for aging baby boomers and paying into social security so the next generation can also afford to retire. With a Republican-controlled Congress, the president knows there is no chance of a comprehensive immigration bill anytime soon. Congress has had years to enact reforms. They did nothing.

Now Republican leaders are taking to the media, threatening  Obama with impeachment and urging him not to act.

The executive order is part of the president’s powers. The Republicans like it well enough when the president is a Republican.  And if they don’t like the law they should change it.

The Republicans claim an executive order on immigration would “poison the well,” and scuttle any chance of an immigration law from Congress. They all have the same talking points.

That’s laughable. For the last six years House Republicans have been blocking any and every piece of legislation that comes their way. They’ve threatened to shut down government and wasted countless hours voting to repeal the president’s healthcare act –even though that was not ever going to happen.

And now that Republicans have control of both the U.S. Senate and the House they claim they might work on immigration reform.  They won’t.

President Obama needs to push forward with his executive order on immigration. With a stroke of his pen he can accomplish what Congress will never do. Millions of families will be grateful. And our economy will benefit.

So stop the hesitation Mr. President.  Do  what you know is right. We can’t think of a better Thanksgiving and Christmas gift than immigration reform.  Can you?

What do you think?